References to the Sone Family from Dr Joanna Martin's 2008 report, The History of Ubbeston Hall commissioned by Nick and Annie Reid the present owners of the Hall. They have kindly allowed access to and use of this research.

The first recorded owner of the house now known as Ubbeston Hall was John Sone (c.1593-1641), the grandson of Richard Sone of Halesworth and son of George Sone of Wissett. [John Sone's stepfather was John Jener of Laxfield, and hence Sone identifies with Laxfield.] John Sone married Mary, the eldest daughter of William Dade of Tannington in 1635. [The family of William Dade (1579-1659) had owned Tannington Hall since 1588. See below memorial tablet in St Ethelbert's, Tannington.]

A deed quoted by the antiquarian David Elisha Davy [nephew and heir of Eleazar Davy of Ubbeston Hall and the Grove, Yoxford] indicates that Sone bought an estate in Ubbeston, together with other property in Heveningham, Huntingfield and Laxfield, from Samuel Cooke of St Andrew's, Ilketshall, in 1637.

On the 29 March 1641 the foundation stone of a new house in Ubbeston for John Sone and his family was laid. However, John died seven months later (he was buried on 25 October) [in Ubbeston Church] at which time he was still living in Laxfield. Building work may well have been suspended after his death, and we do not know when the house was ready to be occupied.

Field book of Ubbeston, 1641: Copies of some pages from this document were sent to the Suffolk Archaeological Unit in 1979. 'A field Booke, made according to a certaine platt, mapp or Geographicall table, of the ancient Scite of the mannor of Ubbeston in the County of Suff[olk], with divers lands thereunto belonging. With a very fayre house therupon now in building, the foundation therof was laid the 29 day of march in this present yeere of grace 1641. All the premises above said are percell of the possessions of Jone Sone of Laxfield in the said county of Suffolk, gent. ...[added in different handwriting] Which Mapp, together with this Booke, beareth date the twentieth day of May in the yeere of our Lord God 1641 per me John Martin.

'John Sone of Laxfield in the County of Suffolk, gent., holdeth of William Heveningham Esq. of his manor of Ubbeston by Copy of Court roll bearing date the 23rd day of October [1637] Among the other lands the Scite of the mannor of Ubbeston with divers houses, yards orchyards and a parcell of land called Strawberry hills'...

Parcels of land held by Jone Sone include:

1) The scite of the manor of Ubbeston and Strawberry hills: 2 acres, 2 roods, 08 perches

The new house begun by John Sone was known as Harefield House, its name apparently taken from the piece of ground on which it was built. It was evidently close to the ‘ancient scite of the mannor of Ubbeston'. Any manor house that may have stood there had probably gone by the early 17th century: the Heveninghams, who had been lords since the 15th century, lived elsewhere.

John and Mary Sone had three daughters, Mary (born c.1637), Dorothy (1640) and Elizabeth (1641). In his will, in which he describes himself as John Sone of Laxfield, gent., he left all his property to his daughter, Mary [who was four or five at the time], the only one of his children to grow up and marry.

In 1657 [at the age of 19 or 20] Mary, the only surviving daughter of John and Mary Sone, married (as his second wife) Sir Robert Kemp, 2nd Bart., of Gissing in Norfolk. [They were married on 20 November 1657 in St Andrew's Church, Holborn. The church survived the later Great Fire of London but was pulled down anyway and replaced with the present Wren version.] In their marriage settlement, drawn up in 1658, ‘all that capital messuage called Harefield House in Ubbeston' and the rest of the late John Sone's estates were settled on the newly-married couple. Sir Robert Kemp is said to have ‘removed from Gissing [to Ubbeston] and made Ubbeston Hall his seat', but we do not know when exactly this happened. [The couple appear on a deed letting all the Ubbeston possessions to Nicholas Jacob et al in 1658.]

Sir Robert Kemp's mother-in law, Mary Sone (nee Dade) probably lived with the Kemps until she died in 1885, having outlived her husband by 44 years. She was clearly a wealthy woman: bequests in her will include a tent-stitch purse with £10 of old gold, a ring with 7 diamonds and a silver porringer [a small soup or porridge dish], which she left to one granddaughter; and a wrought purse with £5 of gold, a silver tankard and silver candlestick, and a pair of earrings with small diamonds, which went to another granddaughter.

[Mary Sone (nee Dade), born at Tannington 7 August 1615, married John Sone at the church there on 26 May 1635 and died in Ubbeston on 12 Jan 1685. She had lost her own mother when she was about 10, two of her three daughters died young and she became a widow at the age of 26. She seems to have been a kind and generous woman, restoring the rectorial tithes to the church in her will, albeit in return for looking after the chancel where she and her husband were buried, leaving bequests to her servants and remembering the poor of Ubbeston both before and after her death. Her daughter, Mary Kemp, raised a memorial to her mother on the wall of Ubbeston Church.

From ‘English Ancestry of the Dade Family of Virginia': ‘In the church of Urbeston [sic], Suffolk are mural monuments to John Sone and his wife, Mary Dade. They have shields with the arms of Sone and Dade, and her epitaph is as follows:

‘Mary the wife of Sir Robert Kemp, Baronet, erecteth this monument to the memory of her dear mother, Mrs Mary Sone, Relict of John Sone, Gent; and eldest daughter of William Dade, Esq. She was born the 7th of August 1615 and died the 19th June 1685 after she lived a Widow about 44 years.'] 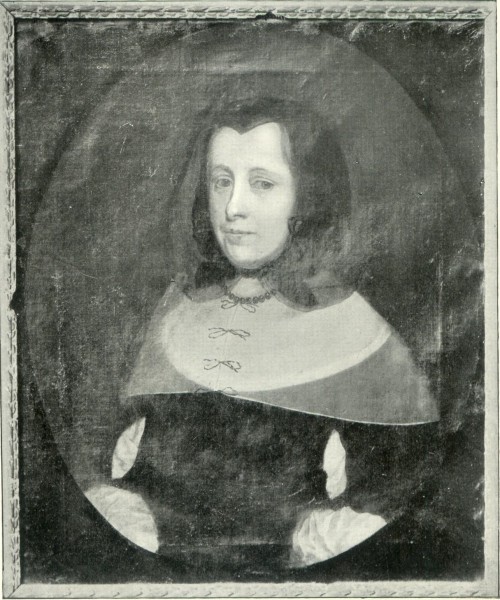 Family portrait of Mary Sone nee Dade  by kind permission of her descendant.

The last will and testament of Mary Sone ‘in the county of Suffolk', widow, dated 10 September 1679

My body to be buried in the chancel of the parish church of Ubbeston by the body of my deceased husband.

To my dear cousin Mrs Mary Astwood of Chesterton near Cambridge, £3 to buy a ring. To my uncle Mr Thomas Dade of Pettistree and to so many of my brothers and sisters as shall be living at the time of my death, £3 each to buy rings, except for my brother, William Dade, to whom I give £10 to buy horse. To ‘my Man', £5. To my maid Sarah Grenlene, an annuity of £10 a year for life, also ‘the bed shee lyes on as it stands, and some other things sett downe in a note annexed to my will'. The rest of the servants in the family are to be rewarded according to their trouble occasioned by my sickness and death. To my cousin Hannah Dade, the daughter of my brother Anthony, £10. To the three daughters of my youngest sister, £10 each. To Mr Jones, the present minister of Ubbeston and his successors ‘provided they be Orthodox' the tithe corn of the same parish on condition that they keep the chancel in good repair. To the poor of the towns of Halesworth, Wissett and Laxfield, £3 to each parish to be distributed by the churchwardens and overseers of the poor within one week after my death. To the poor of Heveningham, 40s to be distributed after the same manner. To the poor of Ubbeston, £10 of which 40s to be distributed as above, and the other £8 to be laid out in 4 years at the rate of 40s a year in bread corn, to be distributed by the churchwardens and overseers at the beginning of Lent.

I give all my lands, meadows and pastures called Cookes, containing by estimation 40 acres with their appurtenances, lying in Ubbeston and Heveningham, now in my own use, which I purchased of Borret of Huntingfield, yeoman, of an indenture between him the said Simon and me Mary Sone, dated the 7 September 1654, to my ‘dear and only daughter' Dame Mary Kemp and her heirs. If she has no issue I give the same to my brother William Dade of Tannington, gent., paying thereout the sum of £250 to the rest of my younger brothers and sisters within 2 years after he inherits. If any brother or sister is dead by this time, their share is to go to their children.

To my son-in-law Sir Robert Kemp, Bart., the sum of £20. To Mrs Mary Kemp, one of my grandchildren - a tent-stitch purse with £10 of old gold, and my ring with 7 diamonds and my silver porringer [a small soup or porridge dish]. To Mrs Jane Kemp, another of my grandchildren, a wrought purse with £5 of gold, a silver tankard and silver candlestick, and a pair of earrings with small diamonds, also two pair of the best sort of sheets and two pair of ‘pillowbiers' [pillow cases], ‘a sute of diaper table linning', viz. a long table cloth, one short one, a dozen napkins and a towel. To my two grandsons Mr Robert Kemp and Mr William Kemp, £20 each.

The aforesaid Sir Robert Kemp to be supervisor of my will ‘who have promised to permit my daughter freely to dispose of what I give her to any of her children as shee please'. To my dear and only daughter, the residue of my whole personal estate. She is to be sole executrix and is to pay the legacies within one year of my death, apart from the legacies to the poor which are to be paid as directed above.

Testatrix says that she has written the will with her own hand and signs her name.

Memorandum attached to the will, dated 10 September 1679 [This one is in the same handwriting as the will]

I give unto my maid Sarah Grenlene my ‘saveguard' [a special petticoat worn by a woman to protect her dress when riding] and pilion cloth, the joined cupboard in my own chamber, the little table, the andirons with the firepan, tongs and bellows, the chair and barred trunk in her own chamber, the joined box where her linen lies, 6 pewter dishes of such sizes as are fittest for her use, a pewter basin, the brass candlestick used in my chamber, a brass pot, a baking pan and two pair of sheets such as she use to lie in.

Memorandum attached to the will, dated 9 August 1684 [this one is in a different hand from the will and the first memorandum]

Though it be not in my sealed will ‘tis my desire that my son Blois have £20 and his son Mr Robert Blois should have a piece of plate of £10 and his sister Mrs Mary Blois, another of my grandchildren, a piece of the like value with the same letters upon it as are upon the tankard I gave her. Also the little diamond ring that was bought with my Lady Brook's legacy. She is to have them all in her own custody at 15 years of age.

Will proved at Yoxford 19 October 1685 by the oath of the executrix named in the will.