Research on the Kemp Family from Dr Joanna Martin's 2008 report, The History of Ubbeston Hall commissioned by Nick and Annie Reid the present owners of the Hall. They have kindly allowed access to and use of this research.

In 1657 Mary, the only surviving daughter of John and Mary Sone, married (as his second wife) Sir Robert Kemp, 2nd Bart., of Gissing in Norfolk. In their marriage settlement, drawn up in 1658, ‘all that capital messuage called Harefield House in Ubbeston' and the rest of the late John Sone's estates were settled on the newly-married couple. Sir Robert Kemp is said to have ‘removed from Gissing [to Ubbeston] and made Ubbeston Hall his seat', but we do not know when exactly this happened. [The couple appear on a deed letting all the Ubbeston possessions to Nicholas Jacob et al in 1658. By 1661 Robert Kemp signs the Ubbeston accounts in the Town Book.]

Richard Blome's book, Britannia, which was published in 1673, lists country seats and their owners. Sir Robert Kemp is described as being ‘of Uppeston [sic], Bart.' The Hearth Tax returns of 1674 confirm that Sir Robert Kemp was, by this time, living in Ubbeston, where he was taxed on 15 hearths (more than anyone else in the parish, where no-one else was taxed on more than 5 hearths). Savill's sales particulars [2008] suggest the house was built ‘about 1670', but this does not appear to be based on any contemporary evidence…

Sir Robert Kemp, 2nd Bart., died in 1710 and his property in Ubbeston passed to his son, who became Sir Robert Kemp, 3rd Bart. The latter, who was MP for the County of Suffolk, died in 1734, having married four times. [The 2nd Bart regularly signs the Town Book up until his death in 1710. The 3rd Bart is not so prevalent. He signs in 1737 and 1738, suggesting he may have been often away from home.] His heir was his eldest son, another Robert Kemp, who thus became the 4th Bart. [His name only appears in the Town Book in 1743 and 1744 and this is the last entry for a Kemp. From c1748 Eleazar Davy is his tenant.] A deed quoted by Davy (David Elisha)] suggests that the 4th Bart. was in some financial difficulty by 1742 and struggling to pay off a number of legacies and annuities which his father had bequeathed to various members of his large family. [See transcription of the 3rd Bart's will in the following article.]

Sir Robert Kemp 4th Bart., died unmarried in 1752 and his property was inherited by his younger brother, Sir John Kemp, 5th Bart. He too died without issue (in 1761) and the property passed to his nephew, John Kemp (son of the Revd. Thomas Kemp), who became the 6th Bart. Sir John Kemp died underage and unmarried in 1771. His heir was his sister, Mary Kemp, who died unmarried in 1782-3. In her will, which was written in 1782, she directed that her property in Suffolk should be sold after her death.

The sale of the Kemp family's properties in Suffolk was advertised in the Ipswich Journal of 6th September 1783, and again on 14 August 1784, when Ubbeston Hall was described as ‘a small Mansion-house, Offices and Gardens'. Two months later the Hall was sold to Joshua Vanneck (later Lord Huntingfield) of Heveningham Hall. From this time onwards Ubbeston Hall belonged to the Vannecks.

Sir Robert Kemp, 3rd Bart., who died in 1734, appears to have lived at Ubbeston, and he was of Ubbeston in 1734 when he made his will. It seems likely that the Hall was rented out fairly soon after his death: one of the parties to a deed of 1748 was Eleazar Davy of Ubbeston Hall (uncle of the antiquarian David Elisha Davy); Sir John Kemp, 6th Bart., was living in Tooting, Surrey, by the time he made his will in 1761, and his niece Mary Kemp was living in Westminster in 1782 when she made her will.

A gouache drawing of Ubbeston Hall [shown here on the Ubbeston Hall page] by an unidentified artist shows the Hall and stables. The drawing is undated, but was probably done in the 1770s. Eleazar Davy is identified as the occupier. Davy probably moved to his newly-built house, The Grove, Yoxford, in the late 1770s 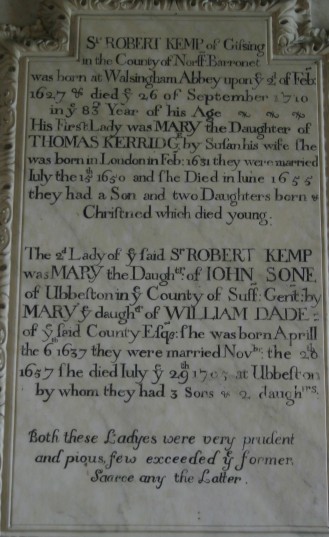 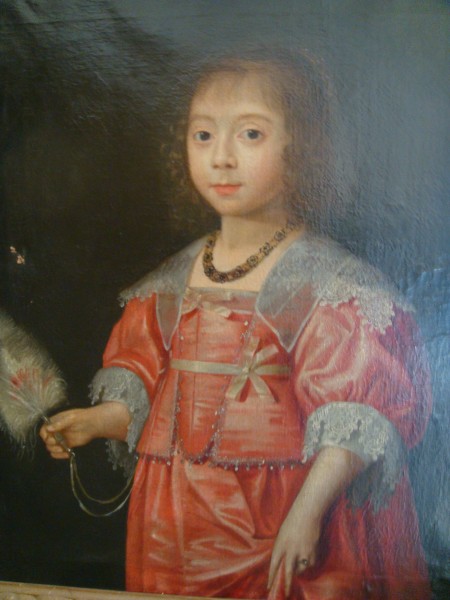 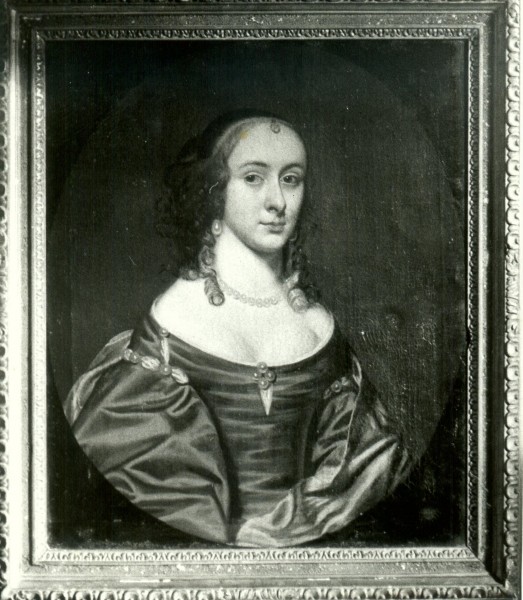 Above are family owned portraits of Mary Kerridge when aged 6 and Dame Mary Sone both by kind permission of a family descendant and below a list of Ubbeston Kemps buried in the vault in Gissing Church. 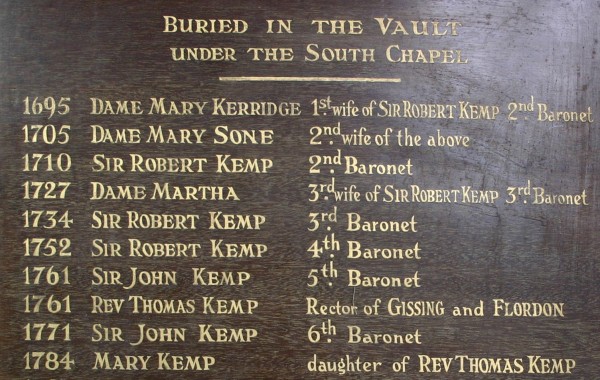