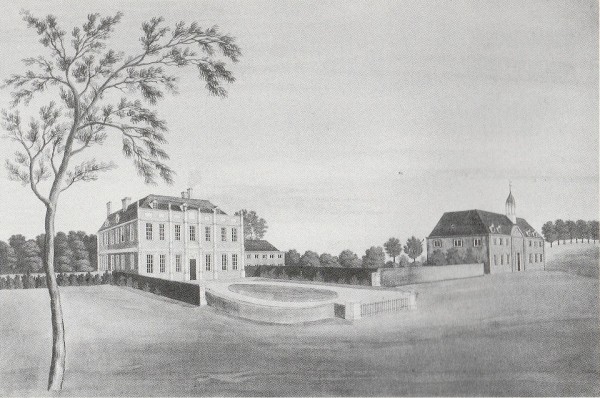 This Hall was demolished c1807 and the present one built.

Evidence from the Gouache Drawing executed in the 1770s by Philip Aitkens, Historic Buildings Consultant.

Harefield House, alias Ubbeston Hall, [built by John Sone in 1641 and enlarged by the Kemps] is shown with a brick façade seven windows wide with a parapet concealing a steep roof. There are six pilasters with imposed classical orders in a manner sometimes used on the façade of late 17th and early 18th century gentry houses but rarely seen in Suffolk. The appearance of this façade favours a date of c1700-1720, but it may have been applied to an earlier building. [Sir Robert Kemp pays tax for 15 hearths in 1674, so either Sone's house was that big or the Kemp gentrified one had been built by this date.] The outermost pair of sash windows on each side could have been replaced by tripartite sashes at some time before 1807 during a refurbishment. [This house was pulled down c1807 and the present Ubbeston Hall built.]

The stable range is shown standing beside the house and facing the same way. The present stable has massive rusticated quoins of cut brick which must be a late 17th or early 18th century feature. This must certainly be the building that is drawn in the 1770s gouache. Today the stable faces towards Ubbeston Hall yet in the gouache it stands parallel. It has been greatly altered in the 20th century but appears already to have been reduced in size before the 1840 Tithe Map was drawn; no doubt it was too large for an early 19th century tenant. [In 1799 the stable may have been referred to as Ubbeston Hall Farm as it is again today. In Dr Joanna Martin's report she quotes the Vanneck MSS at Cambridge University Library: In 1799 ‘George Simpson for Ubbeston Hall farm - £181 p.a rent… Robert Sillet for a dwelling in the reserved part of Ubbeston Hall - £5.10s p.a.' By 1964 an aerial view of the stable building shows the remaining end, which is now restored, as a working barn, with only a doorway on the side facing Ubbeston Hall.]

There are further complications: A two-storey building at least five windows wide is depicted perhaps about 50 yards behind the stable. Is it part of the house or an outbuilding? Does it stand on the site of the present-day barn, or is it the orientation of the whole drawing is completely different?

The left-hand elevation of the rear wing of the house is shown six windows wide and is likely to face towards a garden. There is a garden wall still standing today which formerly enclosed the north side of the garden which lies to the west of the present house. The wall has the same narrow bricks as Ubbeston Hall itself [the 1807 Hall has bricks from the former building], but they are not reused, therefore this is a 17th or early 18th century wall. In gentry houses walled pleasure gardens were very popular at that time and this wall could formerly have been a very long one, therefore the surviving length of wall need not have related to a house standing exactly on the same site as the present one.

This is part of a report commissioned by the present owners of the Hall, Nick & Annie Reid, who have kindly allowed access to and use of this research.