Ever since arriving in Ubbeston for the first time in January 1998, the location of the Green has proved both a mystery and a challenge. We were told by our estate agents, that the reason our house and the next two houses on the B1117, originally only had entrance doors on what would appear to be the back of the houses and looking over the back field belonging to Blackberry Farm (formerly Lodge Farm), was because this had been the Green. This theory has never really held water. It's true that the six semi-detached dwellings that became the aforementioned three detached houses had no doors on the road side and only downstairs windows but it was not true for any of the other buildings in the road. 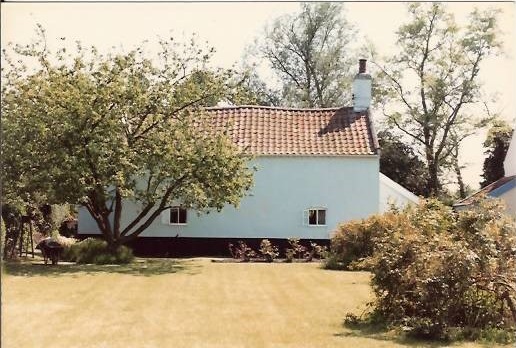 Above picture of Tyndale's front as it was up until the mid 1990s. It probably had changed little from the time it was built c1830. Photograph courtesy of Alan Shields.

In the year 2000, we raised the village sign and it would make sense if the plot chosen is indeed the edge of the original Green, which must have been enclosed a very long time ago. It's proving very difficult to find any documentation that mentions it by name. The best clue so far has been in the 1742 document discovered by Ruth Downing, a transcription of which is shown on the website - Tylehouse Mortgage 1742

Other mentions in The Manor of Ubbeston Court Rolls (SRO Ipswich doc: HA233/1/1)

So watch this space…..