Children ran to the scene of the crash. One of them, Frank Sherman, then aged 14, recalled in 2006: the aeroplane nearly crashed on the Wheatsheaf - behind the old Wheatsheaf pub… They [the crew] all survived, they thought they'd killed somebody in the bungalow [now called Sunnyside] because they took the chimney off but in actual fact the guy was in his coffin waiting to be buried! John Neave, retired farmer, who had the bungalow built. [Frank has been in touch with the American airmen and has visited them in USA.]

They talked about how they prepared for this crash to survive. The gunners underneath, in the lower part, all had to get on top, in the radio operator's room, all got as high as they could in the plane and then they came down and knocked the top off the chimney on the bungalow, went through a telegraph pole, missed a big oak tree that was there, and they were lucky to miss that, and then they belly landed and just tore the bottom of the plane away. It was during the day time.

But it was a lot of years before I found out where that plane had come from…it was coming back on a mission from Germany. It was badly damaged. It was shot up and it had to find somewhere to land. And it crash landed here. From the crew I found out that they had tried to land at Leiston, which was a fighter base in those days. They realised had they have landed there they couldn't have taken off if the enemy came in so they looked for a field and that's how they came to land there [at Ubbeston].

Frank and his friends saw a crashed Wellington Bomber in nearby Brundish. Ralph Porter, who lived at Rose Cottage, recalled other planes coming down in the locality, one near Blue House Farm, on the way to Stradbroke, again an American plane, this time the crew members were not so lucky. The young Ralph witnessed the men burning. He also remembered a German aircraft coming down at Boundary farm in Badingham. Ralph spoke of another bomber crashing at Wells Corner on the way to Dennington.

Frank recalled a landmine dropping: There was a landmine that dropped at Heveningham Long Lane opposite Goodwins' Farm… early part of the war and they dropped it by parachute... Children were climbing all over this thing and didn't know what it was - just thought it was some sort of tank on this parachute and then, of course, suddenly someone reported it to the police. The police came out and said, ‘This is a live bomb! This is a landmine!' And so they cleared the area.

Anyhow, Mrs Le-Grys that lived down in Goodwin's Farm opposite [to where the landmine dropped] was very friendly with my mother and she said, ‘Can I come to your house? I daren't be in our house because it could blow our house down!'

So she came along to our house and people that wanted were told they could move out their houses and they exploded this thing [landmine] and this Mrs Le-Grys and my mother were in the house and Mrs Le-Grys was in our front room and as she went to walk at 11.00 from that front room to our kitchen she just stopped because this sudden blast took our window and the frame [out] - took the whole thing - sucked it into the room where she was and dropped it outside. Took the whole frame and everything out! And she burst into tears and said, ‘If your window's out, then my house is down!' and the only thing she got was the clock stopped! To my knowledge, there was no other damage [in the area].

The first bombs that I know of in the area - two dropped right in the front field, Church Farm... the old house, and I remember them screaming over our house [The Croft] because they were what we call oil bombs, they were incendiary bombs but they didn't do too much damage. I came and saw the craters.

They had the searchlight up on the top road in Etheridges' field to start with, next to the Wheatsheaf pub, where the plane crashed and it was always getting shot up because it was so open and then they put it down in the Low [Road], opposite Ubbeston Hall.

Frank Sherman's family was prominent in the war effort. His father, Frederick (Dick) Sherman, a former WW1 soldier, was a special constable in Ubbeston during WW2. His mother, Doris, was an Air Raid Warden and in the Women's Voluntary Service. Frank's older brother, Dick, was a soldier. 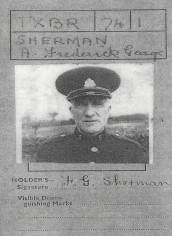 Arthur Day, from Allen's Farm, and Ronnie Smith, from The Mill House, applied to join the Navy together, Ronnie was accepted but Arthur's hammer toe meant he was refused and he joined the Territorials, who met in the Drill Hall in Halesworth, then the Army. The two friends would meet up at the Wheatsheaf, the local alehouse, when on leave. Tragically, Ronnie was killed in a submarine in 1951 but Arthur, who lived in Ubbeston for the rest of his life, died in 2012 aged 90. Arthur met his wife, Margaret, during the war. He knew her brother and went to stay with the family in Ilford, Essex. Margaret declared she 'couldn't get rid of him.' Typically he replied, 'You didn't try very hard!

Arthur is pictured in his army uniform with Margaret. Ronnie in naval uniform stands beside his mother at the Mill House. (Photos from Lesley, the daughter of Arthur & Margaret Day.)