Frederick (Dick) Sherman, long term former resident of Ubbeston, worked in Framlingham for Holmes the bakers during WW1. He and his fellow workers (pictured here in 1915) were members of the Army Service Corps. 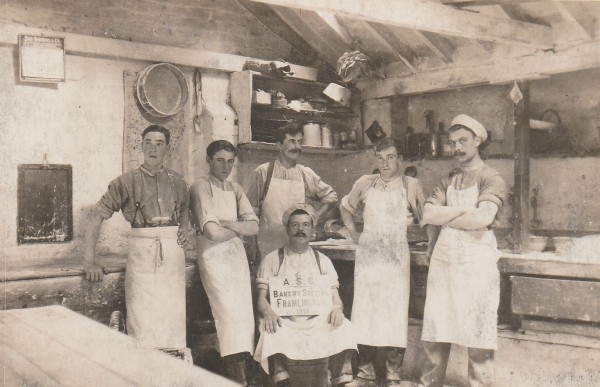 After the war and his marriage to Doris, Frederick (second right) came to live in Ubbeston, where he eventually built up an oil and hardware delivery business. He had been advised against returning to the baking business after his experiences on the Somme and as a POW. Two sons were born to Fred and Doris in Ubbeston, Dick and Frank, who spoke of his father in 2006 and 2013:

I was actually born at the Croft. It didn't have a name then - we called it the other house [just Ubbeston Green]. The first house [my people lived at] was opposite the Mill House [brother Dick was born there in 1925]. My people moved there from Framlingham when they married. We were both born in Ubbeston. My father had a business at what is now the Croft. The house looked a bit different [in those days]. That was because it was a double [dwelling] house - we didn't use the left hand side to live in - that was our storehouse where my father kept all his stores because he had an oil and hardware business where he went round the villages every week - same round - all around Cratfield, Laxfield, Huntingfield and all the villages around - delivering oil, because it was all paraffin lamps, no electric, and he also sold working clothes - wellington boots - you name it!

Even though there were shops in Laxfield in those days, when people had their heating oil delivered to their door, they would ask for provisions too. My dad was one of the first people to own a motorised van. He had three different vans - the first was a Ford Model T converted into a van. It had wooden wheels - very old fashioned -and when my dad got the newer model, my brother, Dick, and I would play in the old vehicle in th orchard at home. The next van was and ex-army vehicle and was much bigger.

As a young boy I would help him on a Saturday, the day he delivered to Laxfield. We would go round the villages and end in Laxfield. People looked for him. One of the last calls would be to the public house, The White Horse [on the corner of Stirrup Street and Cake Street, Laxfield - now a private house]. He would supply them and end up with half a glass of shandy - that's all he ever drank. 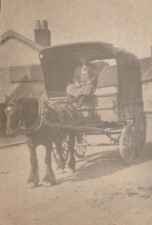 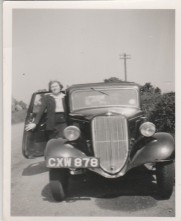 Fred in horse drawn bakery vehicle pre WW1. Fred at the Croft in the 30s. Doris with family car outside the Croft. All photos by kind permission of Frank Sherman.