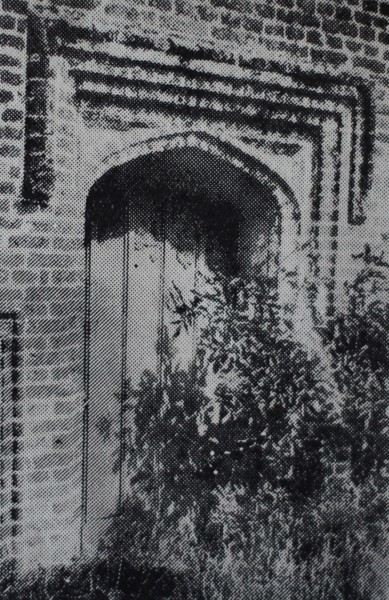 Work in progress… (picture of 16c West Doorway first publshed by the Suffolk Chronicle and Mercury on October 24th 1934. By kind permission of EADT)

1086 Domesday refers to a church in Ubbeston

1100 Approximate date of the nave and chancel of present building

1176 Walter, son of Robert, son of Richard, [de Clare] grants the Churches of Obeston and Henelingham, for the soul of his father, who was buried at St Neot's about 1176

1350 Approximate date of the tombstone in SW corner of the nave. Believed to have been in the chancel until the resoration of the church in 1865

1452 Will of William Bernardi of Huntyngfeld ‘to the fabric of Upston church 6s.8d.

1452 Will of Richard Russell of Upston ‘to the church of Upston to the reparation of the Lord's sepulchre 6s. To Sir Andrew, parish chaplain of the same church 40d.

1469 Will of William Noyse of Ubbeston ‘to be buried in the churchyard of St Peter'. He left 12 pence to the High Altar.

1529 Will of Thomas Cowall, Vicar ‘to the making of a new steeple, to be made within the churchyard of Ubbeston so that the town will help make it up, 10 marks'

1541 Will of John Hamonde of Ubbeston ‘to be buried in the church or churchyard of Ubbeston. To the same church 20s. to the reparation of the window in the steeple'

1545 Churchyard fenced by the inhabitants of Ubbeston

1555 Register started. Entries for the first 45 years were copied in 1600 from an older register by Gabriel Eland, Minister of the Parish

1556 John Browne de Halesworth had the advowson of Ubbeston, his son John was Lord of the Manor of Spexhall.

1585 Churchyard fenced by the inhabitants of Ubbeston

1597 Non-conformity vicar does not wear surplice

1620 Robert Symonds died and buried in the east of the chancel. Other information suggests his was the oldest legible tombstone in Churchyard near the east end of the church (the chancel). (Unnamed source)

1641 Johne Sone, father of Lady Mary Kemp and builder of the original Ubbeston Hall (Harefield House), died on 25 October and was buried in Ubbeston Church in the chancel

1642 Elizabeth Sone died 23 October aged just 14 months. She was the daughter of John and Mary Sone.

1643 William Dowsing, puritan and iconoclast, born in Laxfield, seems to have omitted any mention of St Peter's Ubbeston in his journal of destruction. Maybe the church was already conforming to his extreme puritanical tastes?

1654 Churchyard fenced by the inhabitants of Ubbeston

1665 Thomas Bradley alias Jacob (of Jacob's Hall, Laxfield and married to Barbara Heveningham) died and was buried in chancel at Ubbeston Church.

1685 Mrs Mary Sone died on 12 January and was buried in the chancel with her husband, John. Her daughter, Mary Kemp, raised a memorial to her on the chancel wall.

1685 The rectory was re-annexed to the Vicarage by the will of Mrs Mary Sone, widow (mother of Lady Mary Kemp)

1707 Sarah Edwards has to perform penance in the church for ‘committing the crime of adultery'.

1720 Jane Alexander, wife of Waldegrave Alexander of Badingham, Gent., died 3 February and was buried in the aisle.

1746 Revd John Elleshaw, Vicar, died. His remains were deposited in the vault

1748 John James, vicar, died on 14 November and was buried in the church

1752 John James' wife, Deborah, died 2 February and was buried in the church

1755 Hannah Elleshaw, widow of the former vicar, John, died 14 May and her remains were deposited in the vault with her husband's.

1828 Stable built in churchyard by Lord Huntingfield for Ubbeston Vicars' use.

1835 A Sunday School of about 20 children was supported by Samuel Badeley, Vicar.

1872 Joseph Tacon, churchwarden, died on 28 September and buried at Wingfield. A memorial was raised to him in St Peter's in the sanctuary.

1877 repairs and alterations to vicarage. Vicar [Watkins] paid for a box for the communion plate

1879 Restoration of exterior and windows. Cost £253. Appeal was made for subscriptions for work to the church in May 1879 by Rev Watkins and the church warden, J.C.Hubbard. Ubbeston was described as having 200 persons in the parish. The appeal pamphlet noted: 'It is curious that there are eight windows in this Church but not any two of them are alike. When asking for the recasting of the tenor bell, it [the bell] was described as 'useless'. There is a reference to the third bell: 'The missing one has disappeared, but no account is extant of the reason for its removal or the date when it occurred. The wooden frame still remains as proof of its former existence'. [Parish records suggest it was sold in 1805.]

1932 30 November. Graystons in Laxfield invoiced the church for work on the stove: a new top to the cowl; 3 bolts; cleaning pipes

1967 Church in trouble - shortage of money and small congregation

1969 Letter 2 June from the vicar indicates there was a legacy of £1000 left in J Snook's will for releading the tower and reslating the roof.

1973 Mr and Mrs Arthur Day who lived close to the church expressed an interest in purchasing it.

1974 Church offered to a young architect, Christopher Southin for £1000

1975 Treble bell transferred to Henley church as a clock bell

1982 Church converted to a private dwelling by present owners.