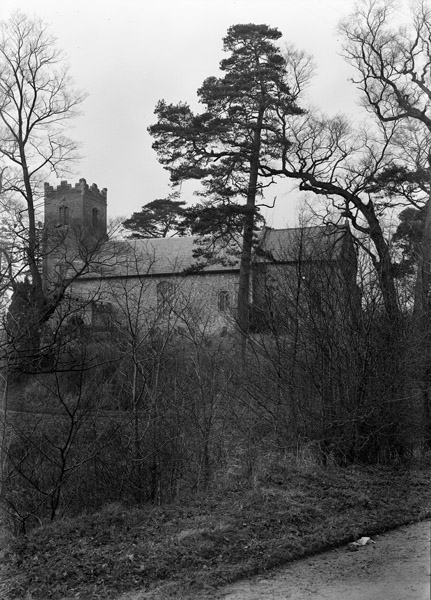 In 1971 St Peter's Church, Ubbeston, became disused and declared redundant on 3 August of that year. It had been designated a Grade I listed building on 7 December 1966. In 1972, St. Edmundsbury & Ipswich Diocesan Board of Finance submitted an application to the then East Suffolk County Council, for permission to convert the church to a private dwelling, and was granted that permission.

By 14 November 1974, it was listed under the Church of England's Redundancy Scheme (Residential Uses), and the proposal was that it should be sold as a potential private dwelling. That year ‘Mr Christopher Southin, a young architect came forward with detailed and … very conservative proposals for the conversion of the church into a dwelling for himself, using the nave with its fine roof and interesting chancel arch almost unaltered as a studio/lounge and with minimum structural alterations in the rest of the building.' (Letter to the EADT by Rev John Finch, 26 April 1974).

The Rev John Finch wrote the above in a reply to a letter by Joan Hellary living in the Old Rectory Ubbeston. Joan was the Secretary of the Save Ubbeston Church Appeal and Rev Finch answered her lette, via the newspaper, in his capacity as a member of the Diocesan Redundant Churches Uses Committee. Joan wrote to the EADT two days earlier on the 24th. She pointed out the Church Commission's proposal to sell the church for conversion to a private dwelling for £1000. In the letter she describes the church as occupying ‘a commanding and beautiful position in an attractive but widespread village. 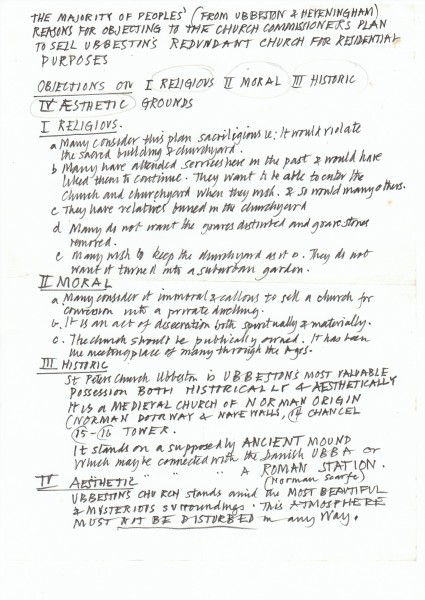 The Save Ubbeston Church Appeal held a public meeting at Heveningham Hall Tea Room on Monday 29 April 1974 at 7.30pm ‘to report progress of the campaign to prevent the church being sold for conversion to a private house'. The following day the Committee Secretary, Joan Hellary, wrote to the Church Commissioners about the outcome of the meeting:

Three motions were put to the meeting, all were passed by a large majority…

1st. Resolution that the church be bought or acquired for use as a community centre by the people of Ubbeston and surrounding district. That it be maintained and kept as appropriate to an historic building that is part of the heritage of the locality, and of the Country. That the chancel be screened-off from the nave so that occasional services can be held there. That water, electricity and toilet facilities be installed, so that the nave can be used for the following communal activities:- Sunday schools, Scout and Guide activity, Lectures, Concerts, Exhibitions, Poetry readings, Games for young people (but not dances), Harvest Suppers, Sales of work etc. in aid of charities, &/or local groups. Events relating to local preservation & conservation societies.

2nd. Resolution (in the event of the first being rejected) That the meeting would prefer that the church be ruinated, and made safe as an historic monument, rather than it be converted to use as a private house.

3rd. Resolution That The save Ubbeston Church Appeal Committee take legal advice to establish whether ownership of the church and churchyard is vested in the Parish Community of Ubbeston, or is at the disposal of the Church Commissioners. That the Church Commissioners be informed that our committee intends to seek such legal advice. (The movement's aims were supported by the late Norman Scarfe.)

By 12 July 1974 the EADT was reporting ‘Little hope of saving church'. The first owner of the redundant church did not realise his hopes to convert it. This was to happen in 1982 when the present owners were granted permission by Suffolk Coastal District Council to do just that. They renamed the building Blyth Turrets.