Sanctuary N. Top (1854) In memory of the Revd. Samuel Badeley LLB for 54 years Vicar of this Parish. He died deeply revered and lamented by all in the 85th Year of his Age - also of Harriot Jane, his wife who lies buried in the same vault.

Bottom In affectionate remembrance of Joseph Tacon late church warden of this parish who departed this life on September 28th 1872 aged 86 years … Interred at Wingfield. Blessed are the merciful for they shall obtain mercy.

Sanctuary floor N. In memory of the Revd. Simon Adams the Revd. Vicar of this Parish [Vicar until 1774-1800]

Mid aisle floor slate Jane Alexander, the wife of Waldegrave Alexander of Badingham Gent and Daughter of Maurice Shelton of Shelton in Norfolk, one of the best of Wifes [sic] and Mothers. Dyed the third of Feb.ry 1720 Aged 60. This Gravestone was put down by her Eldest daughter Mary the wife of Christopher Echerd Vicar of Cransford [Jane's uncle was Sir Robert Kemp 2nd Bart.]]

East Nave Under this stone is the body of John So[ne] Gent. to whose mem[ory] this monument upon the wall is erected [d.1641]… lyeth buried Dorothy Sone daughter to John Sone Gent. [d.1640]

Chancel Floor North The monument on the wall sheweth the time of the birth and death of Mrs Mary Sone who lies here interred.

Above Here lyeth the Body of John Sone Gent who died the 24 of October in the 42nd year of his age ad in the Year of Our Lord 1641. He had to wife Mary the daughter of William Dade of Tannington Esq. by whom he had issue three daughters Mary, Dorothy, Elizabeth IN HOC VIXIT &VIVIT

To Left In a vault in this church were deposited the remains of the Revd. John Elleshaw who was instituted to this parish in 1746 and of Hannah his widow the daughter of John Clarke and Honor his wife of Henstead in this county who died May 14 1775. This tablet was erected by his great niece Frances Sarah Bartlett of Duke's Bridge House, Bungay in 1848

Right Mary the wife of Sir Robert Kemp Baronet erecteth this monument in memory of her dear mother Mrs Mary Sone Relict of John Sone, Gent. and eldest daughter of William Dade Esq. She was born the 7th of August 1615 and died the 10thof June 1685 after she had lived a widow above 44 years

NW Corner of the Nave Uninscribed stone raised above ground level coffin shaped with a cross in relief, lengthwise. An old note says it was in the Chancel until the restoration of the Church in 1865 and that it is for some ecclesiastic but not necessarily Abbot or Prior. Its date is said to be the middle of the 14th century. The Manor of Ubbeston was held by St Neot's Priory until the Dissolution.

Part of Fig 62 - coffin lid from the north-west corner of the nave. Bob Carr, 'A Survey of the Church of St Peter, Ubbeston' by kind permission of Suffolk County Council

East of Chancel in churchyard tombstone inscription: Here lyeth the body of Robert Symonds a batchelor of the age of fower? ? more years who lyved well and was loving and kind to all his acquaintances both in rich and poor and departed this … day of October anno domini 1620 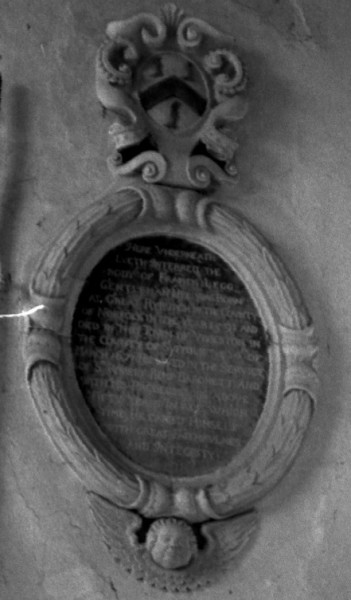 Chancel S.Wall Here lyeth interred the body of Francis Legg Gent. He was born at Gt Ryburgh in the County of Norfolk in the year 1591 and died in this Town of Ubbeston in the County of Suffolk on the 14th of March 1671. He lived in the service of Sir Robert Kemp Baronet and with his predeccessors above fifty years in all which time he carried himself with great faithfulness and integrity. 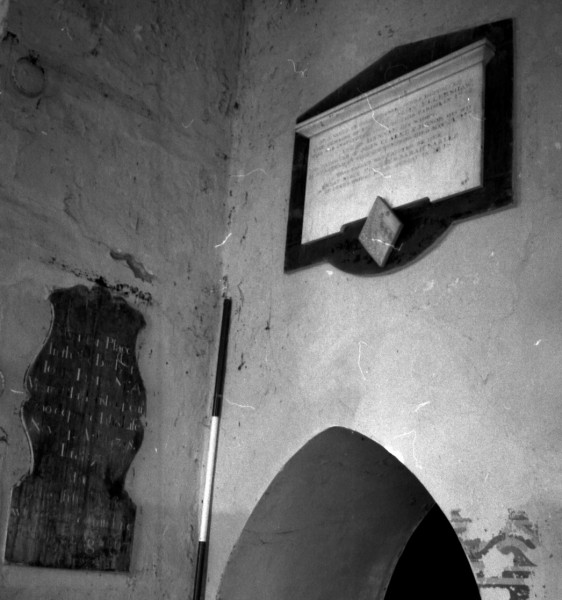