From A Survey of the Church of St Peter, Ubbeston by Bob Carr (1975)

The parish church of St Peter, Ubbeston, was the first in the county to be declared redundant under the Pastoral Measure of 1968…

A church is recorded in Domesday Book, and later c1165, when it was granted to St Neot's Priory (Copinger 1904).

Parish records show restorations in 1865 - principally of the nave with the new pews and floor and a new churchyard fence; 1879 - the exterior and windows; and 1892 - the chancel floor was relaid.

The building stands within a fenced churchyard.

Ubbeston is an isolated church declared redundant on pastoral grounds… At first glance the building is typical of many small village churches, an amalgam of architectural styles and repairs which might be expected to completely mask the form of the earliest structure. However, at Ubbeston, sufficient architectural detail survives to show that the original building was a Romanesque church of three cells: an apsidal chancel, a central tower with a window on both north and south walls, and a nave with opposed north and south doorways and two windows on each wall.

The church consists of nave and chancel in flint with ashlar [large cuboid stone] quoins and vestry, south porch and west tower of red brick. The interior of both nave and chancel are plastered.

The south wall has, near its east end a single two-stage buttress of the 19th century… The combination of 14th and 16th century styles in [the first window] indicates rebuilding and adaptation. The second window is perpendicular in style, but of 19th century workmanship.

The south doorway is late 12th century with single shafts engaged to the jambs rising to decorated capitals and hollow-chamfered abaci [slabs forming top of the capitals].

One stone on the south west quoin is embellished with a sun-dial which has been described as 12th century (Munro Cautley, 1954, 193; plate 195) but might, because of its decorative treatment, be 17th century… 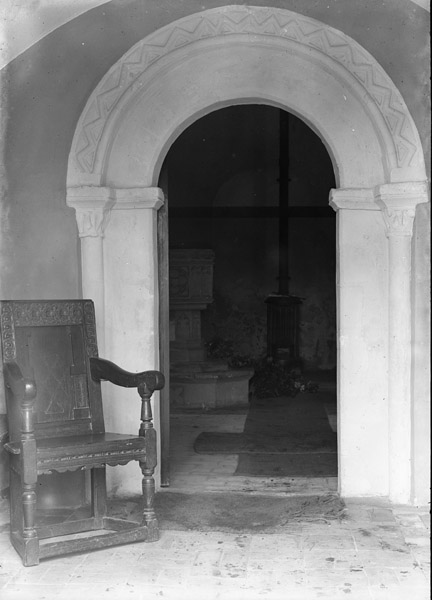 The south porch is late 18th or early 19th century and in brick, with embattled parapet and a round arched south doorway. [Photograph c1930. By kind permission of Suffolk Record Office, Ipswich branch.] 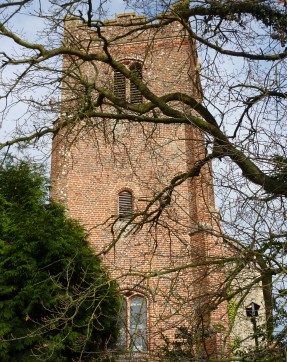 The 15th century roof is of arch-braced collar construction in eight bays. Between the wall posts there are panels forming a cornice decorated with a pierced quatrefoil motif. The chancel roof is in three bays and of the same form. On the first collar west of the chancel arch there is a wooden pulley with two wheels ‘possibly to serve both rowell light and veil' (Munro Cautley 1954, 328). [The light which hung in front of the Rood.]

There are two bells; the first by William Calverden of London is pre-Reformation [1520, now at another St Peter's in Henley, Suffolk, serving as a clock bell], the second, a treble, by Stephen Tonni of Bury St Edmunds and dated 1573 (Raven 1890) [now at Moyse Hall Museum, Bury St Edmunds]. The bellframe has mounts for three bells and seems to be contemporary with the tower.

The octagonal stone font has a bowl decorated with quatrefoils and trefoiled arch motifs on alternate faces, and dates to c1400 (Munro Cautley 1954, 328) 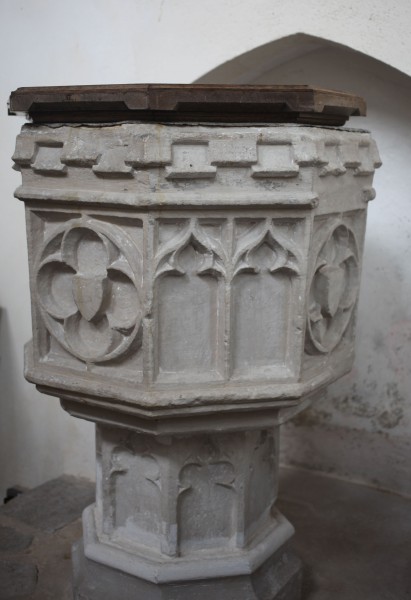 A coffin lid with a raised floriated cross of 13th century type, probably in Purbeck marble, lies in the north-west corner of the nave. Kelly's directory, 1892, records ‘a remarkable stone slab was found under the pavement of the church' in 1865. Restoration that year was confined to levelling the nave floor for new pews. Other wall and floor monuments from the 17th century onwards record members of the Sone, Gent, Alexander and Clouting families.

The nave and chancel stalls, lectern and pulpit, altar table and doors are all 19th century. The lighting is all wall mounted 19th century oil lamps with circular reflecting plates behind the chimneys. In the last years of its use oil heaters replaced coke stoves as the form of heating.

The chancel floor was tiled in 1892 and the old ‘tiles' relaid in the nave aisle (they are in fact bricks). The area behind the pews and the porch had new bricks laid in 1865. Munro Cautley (p.328) recalls a collecting shoe of 1683 and a Stuart chair, both of which have been removed to Heveningham church.

Although a church is mentioned in Domesday Book nothing we recorded can be dated that early. However, a later Romanesque church can be almost completely reconstructed.