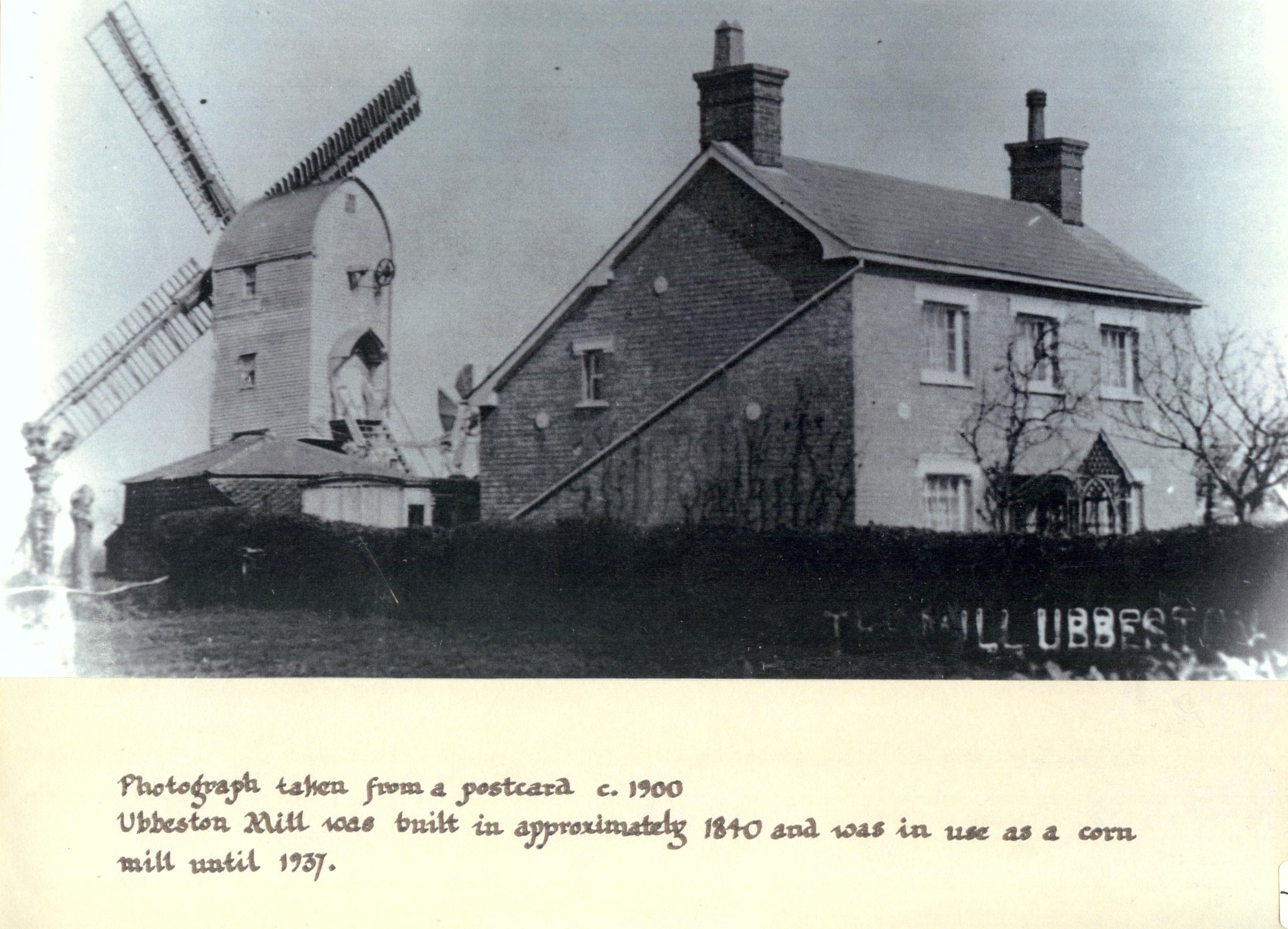 The Mill and Millhouse

At Ubbeston near Halesworth, Suffolk

Now in the possession of Mr Ezekiel Julians

To Be Sold By Auction by Moore and Fisher

At Haveningham Lion Inn, on Friday, the 9th day of December 1831, at Four o clock, p.m., under a Deed of Assignment, with immediate possession.

That excellent POST WINDMILL, recently built upon the best principles of machinery, driving two pair of French stones, 4ft 4in., with spacious Roundhouse conveniently fitted up, together with Dwelling house, Stables, Cart-lodge and other Offices, in substantial repair, with the Yards and Gardens thereto belonging.

Copyhold of the Manor of Ubbeston. 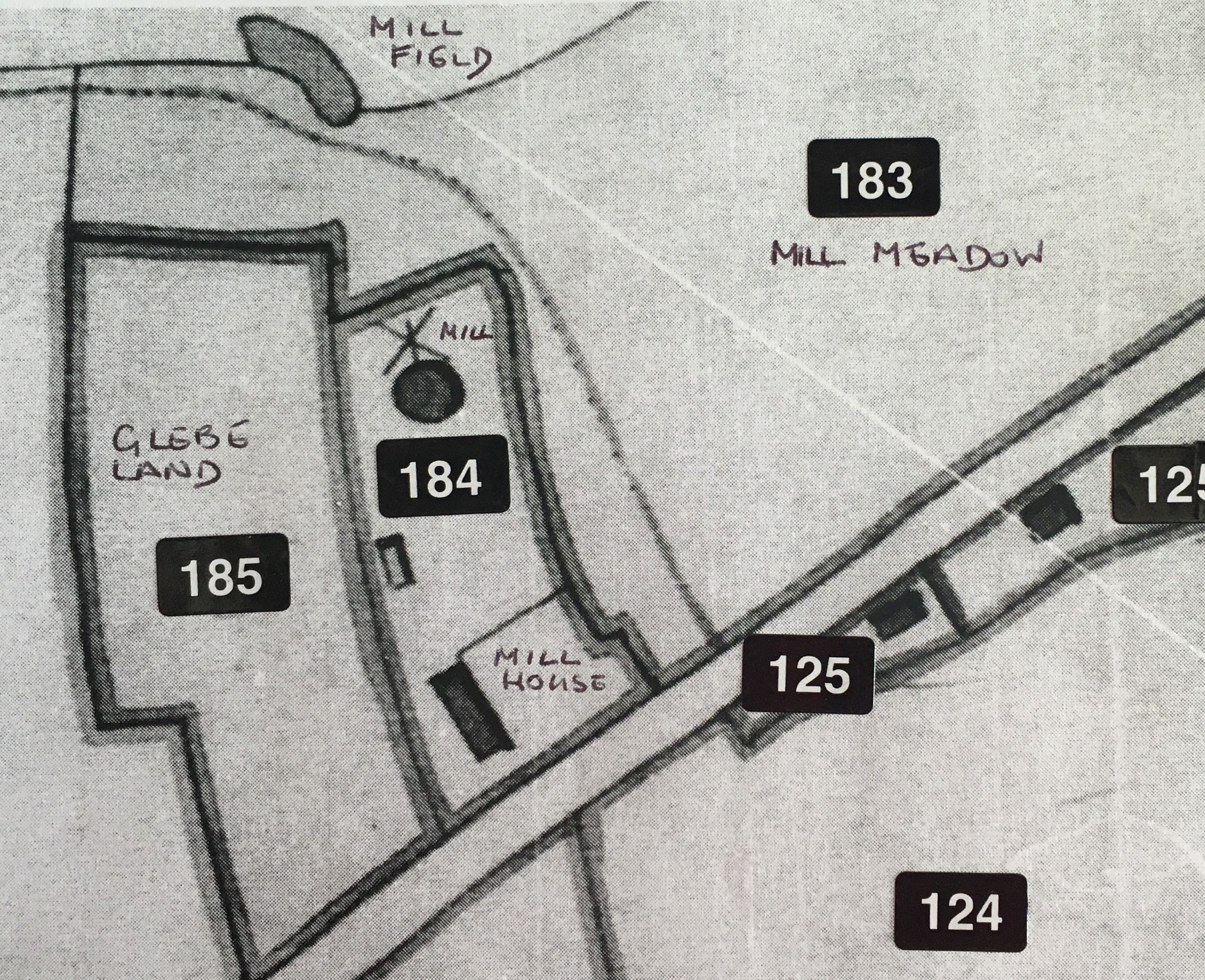 Number 184 on the 1838 Tithe Map.185 is glebe land and occupied by Charles Smyth the miller at the time. David Barnes owned the mill and mill house and plot and Charles was his tenant.

Interestingly this map shows the Mill House at right angle to the road, suggesting that the present house was not there in 1838 but probably built shortly afterwards. [Possibly by George Cracknell - see Rose Cottage & Thorn Cottage.]There were quite a few new builds locally at around that time. The 1904 OS map below shows the house further back from road and a different shape. There appears to be a pond in the adjoining field which in present times bridges the two former plots shown on both maps, which now constitute the Mill House’s lands. 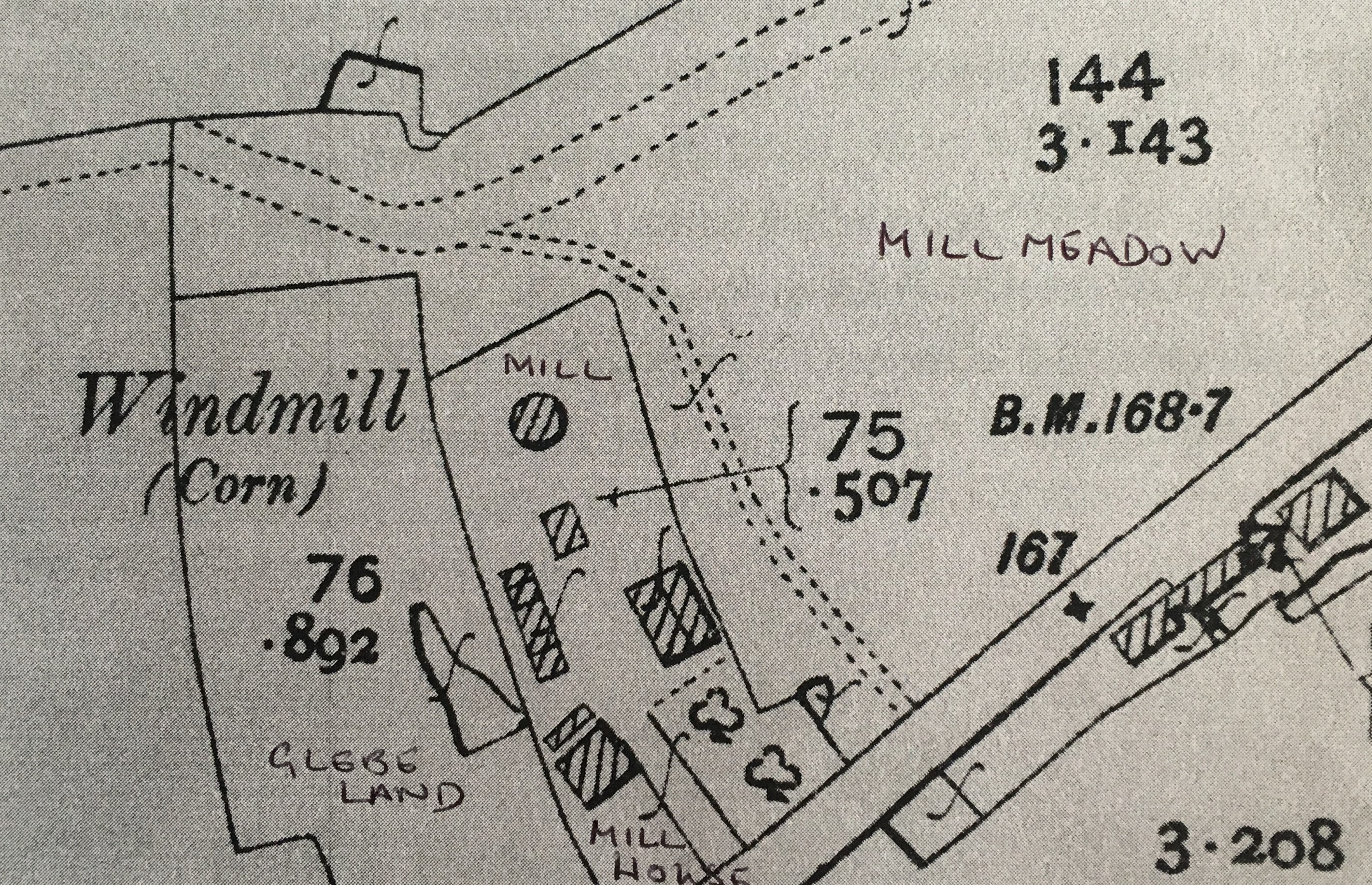 TO BE SOLD BY AUCTION

At the latter end of August next, unless previously disposed of by Private Contract

A MESSUAGE or TENEMENT, situate at Ubbeston wthin 6 miles of Halesworth, and a capital Post WIND MILL (erected within the last 14 years) worked by two pair of French Stones, having a Flower [sic] Mill, all necessary tackle, and a brick Round House, containing bins capable of holding 10 scores of corn. The Property comprises about 1 Acre of Land, and the Mill (which has an excellent trade to it) stands on a commanding eminence. The House is a comfortable one, with every required convenience, and upon the Premises, are Stable, Cartshed, Piggery etc…

Mr Charles Smyth, the present tenant, will shew the Premises…

In 1840 Charles Smyth advertised for an apprentice miller [see below].

‘Charles Smith, of Ubbeston miller,…who had been summoned on the jury, not appearing when called, fined.’

Charlotte Smith, wife, 35, born Halesworth [is this the same Charlotte? And where

All that capital well-constructed POST WINDMILL 18 feet by 11 feet, driving 3 pair 3 feet 4 inch French Stones, and the machinery throughout is of a superior character; a Roundhouse, 24 feet in diameter, brick built and slated, 18 feet high, and divided into convenient bins, fitted up and is adapted for conducting an extensive and respectable business.

A Stalled Stable, with Loft over, Gig and Wain Sheds, Piggeries and Convenient Outbuildings.

Together with a substantial DWELLING HOUSE with Kitchen, Keeping-room, and appropriate conveniences, and 4 Bed Rooms.

The Property is now in the occupation of Mr John Smith, whose Leave expires at Michaelmas next.

Suffolk Chronicle October 1853 ‘...and John Burgess, the younger, described as a miller from Ubbeston, was charged with having at Laxfield, feloniously assaulted Susanna Salisbury, a single woman, with intent; there was a second indictment against the prisoners charging them with a common assault… sentenced to six months imprisonment.’

[John Burgess senior is a cattledealer, 60 living in Ubbeston and born in Stradbroke. His wife is Maria]

[The Suffolk Chronicle in 1864 reported a tragic death by suicide of the same John Burgess, who by then was 33 and married to Ellen. They were Baptists who attended Laxfield Baptist Chapel and ‘having fallen into drinking habits gave way to despair.’ The following year 1865 Mrs Ellen Burgess is listed as the miller.]

1874 James Arbon Rose is still listed as the miller.

Lot 5 – A powerful and substantially erected WIND-MILL on capacious round house, with patent sails, self winding apparatus, and driving 3 pairs of French stones. A capital brick built and slate RESIDENCE, with 2 front parlours, and ample domestic convenience. Adjacent are Stables, Cart Lodge, Chaise House, and other outbuildings, also neat Gardens and Orchard.

The entire Property is of modern construction and in good order, and includes an area of 2 roods, 2 perches, and now in the occupation of Isaac Laughlin.

Are directed to SELL BY AUCTION on THURSDAY NEXT January 20th

The HOUSEHOLD FURNITURE, Choice Milch COW, HORSE, cart and harness, farming implements, milk utensils, and other effects of Mr James A Rose, miller and farmer, by direction of Trustees under a bill of assignment.

1881 Death announced in the paper of Mr James A Rose formerly of Ubbeston Mill. He was described as ‘highly respected’. His daughter M P Rose married that year after her father died. He was spared the knowledge the following situation with regards to his son Louis.

Lewis Rose of Ubbeston, miller, charged with stealing a pig, on the 18th October last, at Ubbeston, the property of Charles Huggins, of the same place, labourer. Defendant pleaded guilty, and was sentenced to two calendar months’ imprisonment with hard labour.

[Lewis Rose served a further three months in prison doing hard labour in 1886. He is described as late of Ubbeston, miller’s man. According to The Ipswich Journal of March 1886 he had stolen an overcoat and other articles in Leiston. The owner was a labourer working in the fields.]

1883 An appeal in the Ipswich Journal: ‘Lost on Monday at Ubbeston, a young white sow. Whoever will bring the same to Ubbeston Mill shall be rewarded.’

James Mills of Sibton and William Nicholls of Peasenhall were charged with stealing six tame ducks from Edwin Ginger, Innkeeper of Sibton. These ducks were traced to the possession of Button Frederick Roe, a miller of Ubbeston, who bought them [from the prisoners] for 1s each… the Bench addressing Roe, told him that his conduct was very suspicious...

Wanted at Once, a good practical miller (single man) to live in the house, good character indispensable – Apply to Mr B Roe, Ubbeston Mill.

In 1887 Button Frederick Roe was still the miller.

Newspaper report from The Diss Express in October 1932 announced the funeral at the age of 73 of Mr Frederick Button Roe of Horham, twin brother to Button Frederick Roe (who died some time before). The twins had started a business to do with mills at Ubbeston.

1893 Henry J Cole still occupied the mill. It was then up for sale by the executors of the owner John B Girling Esquire [had been at least since 1879]

With patent sails, iron shaft and excellent machinery, driving three pairs stones, on spacious brick round-house, with ample storage, all in capital repair and forming most desirable business premises, well situated in Ubbeston, and in the occupation of Mr Henry J Cole.

1908 William Smith is now the miller and married to Louisa. They have 3 sons. The Mill is described in Kelly’s Directory as ‘wind and steam’

[the number of rooms listed for the Mill House is 7]

William Smith still Miller in1937 according to Kelly’s Directory.

1972 Round House (base of mill) demolished and partially removed. 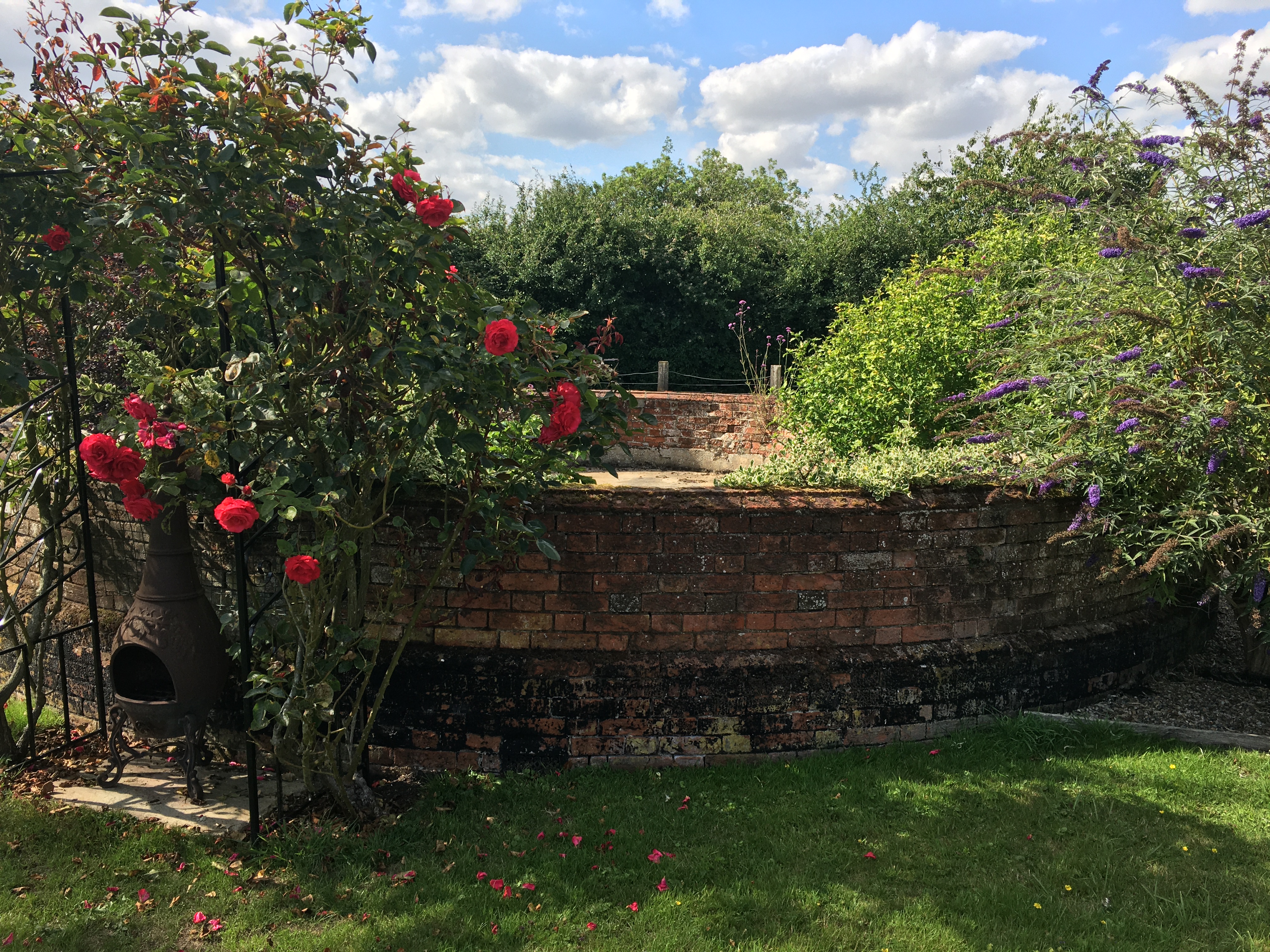 Remains of round house now a sunken garden.

1990 William Lister Smith died in August, 84 years old, at Blythborough Hospital. He was born at the mill and his father was the miller. See 1911 Census above.

View more pictures of the mill on Mills Archive: 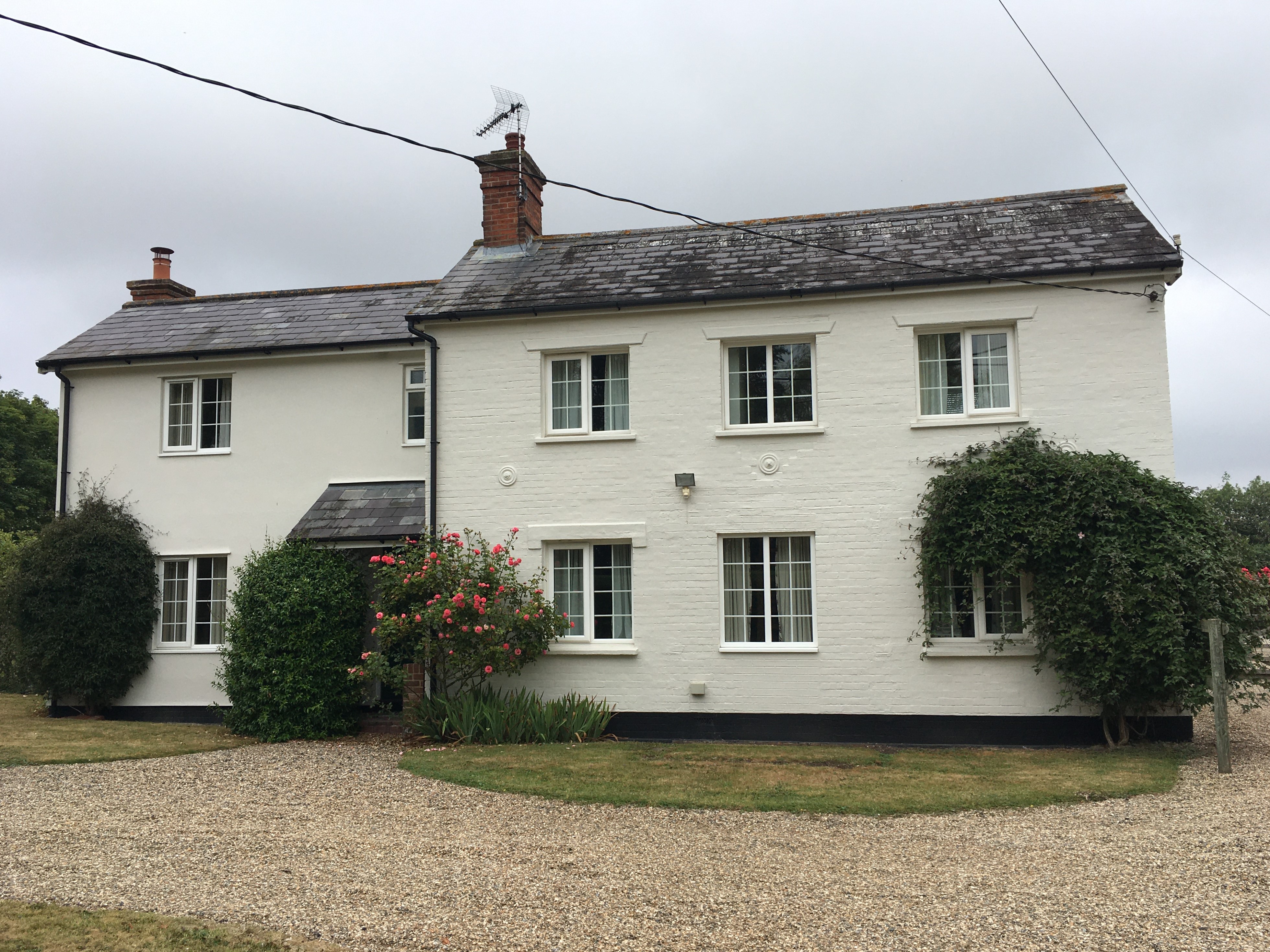 Below: Ethel Smith at Mill House and Ethel at door of Mill House. 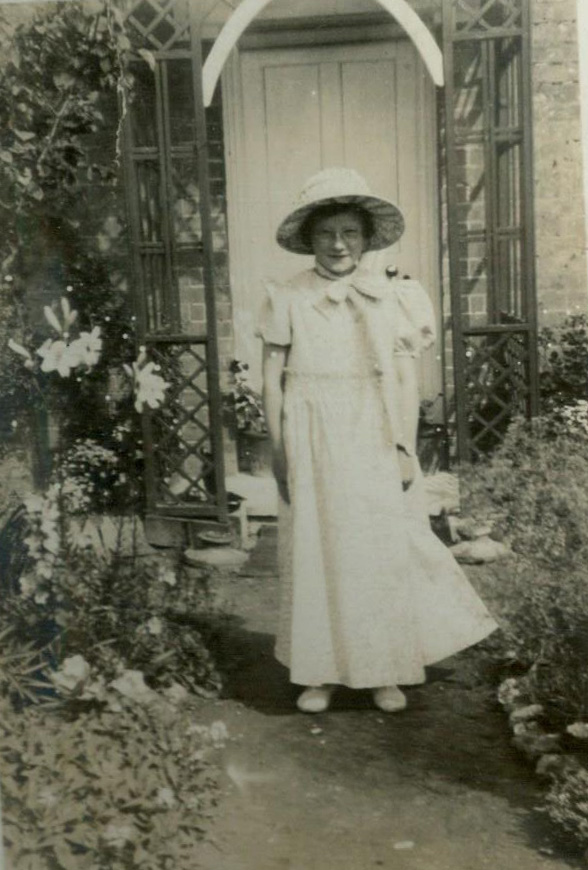 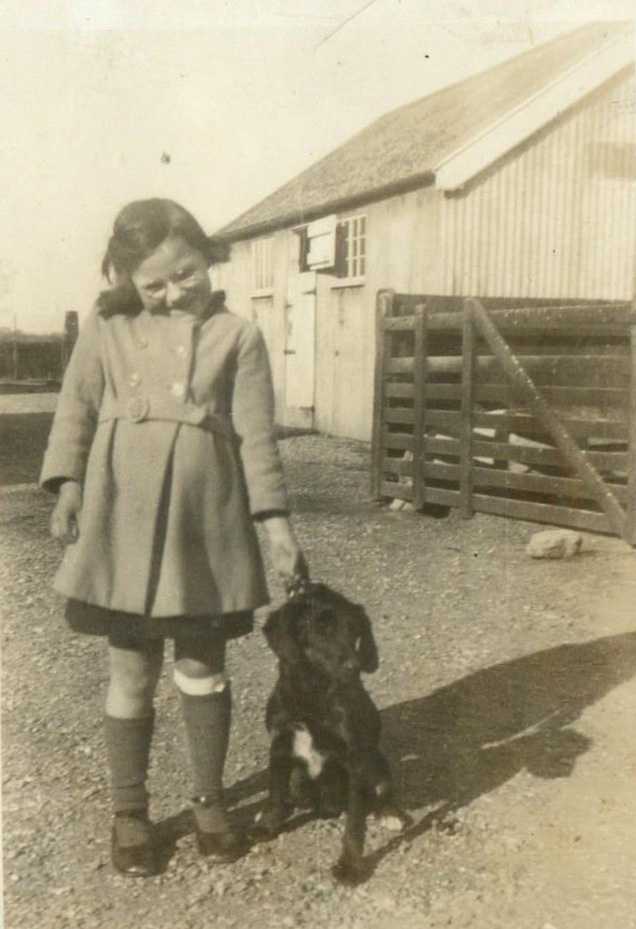