A SHORT HISTORY OF THE OLD RECTORY, UBBESTON 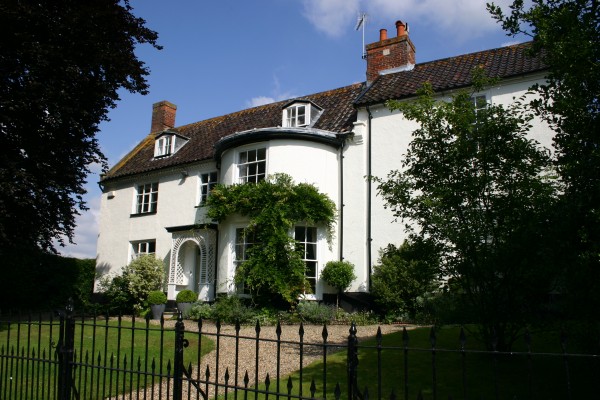 On 22 January 1776, Robert Baldry purchased from Gerard Vanneck, son of Sir Joshua Vanneck, the builder of Heveningham Hall, a plot of land known as Sandpit Piece. It cost him five guineas and the house he built on it was a modest, two-up and two-down; the work progressed so well that he was able to record that year's date together with his initials on the stone which can still be seen on the chimney stack. The speed of construction probably owed something to the fact that he was Surveyor of Heveningham with responsibility for overseeing all buiding work in the parish. He may well have been squirrelling away quality buiding materials for some time: the Palladian window incorporated in the present drawing room could have originally been at the front of the house and, in any case, probably came from a grander one. At the least, some of the materials used in the house date from earlier in the century. Around 1814 the bay window was added, the house enlarged by an extension to the east end - in which the Palladian window was installed - and the house was probably stuccoed in accordance with contemporary fashion.

Robert Baldry was thirty-nine in 1776, his wife, Mary was thirty-three, and they had three children, Robert, Mary Ann and Charles, all aged between eight and two. Their eldest child, Abigail, had died in the previous year. The elder son, Robert, remained single but Charles married Anna, the daughter of George Edwards of Framlingham. There is something puzzling about Charles' career: although the younger son, he appears to have resided at Thorpe Hall, near Woodbridge, which sounds prosperous enough. Nevertheless, he is buried in Heveningham, together with Anna and two of their children who had died within a year of each other, both aged eleven. (Baldry graves to right of church porch. Fisk ones at east end.) Mary Ann was married at the age of sixteen to a childless widower, William Fisk, and bore him four daughters, Letitia, Sarah, Sophia and Elizabeth, between 1792 and 1800. In 1805 the Heveningham church warden died while in office and the appointment was given to William Fisk with the usual condition 'so long as he shall conduct himself soberly, regularly and diligently'. This could have been asking too much since he was replaced a year later - maybe he just wanted a son.

A note in the Heveningham records for 6 January 1806 refers to the settlement of a 'long-contested account between the parish and my father Robert Baldry.' Five days later the elder Robert died; beside the register of burial the vicar Anthony Collett recorded 'bill indented'. Presumably the Baldrys were afraid that burial night have been refused if the matter was not cleared up.

The house was then rented out for seven years until 1813 when Anthony Collett himself bought the property for £420, with the addition of £50 for fixtures. Collett was an M.A. of University College, Oxford, and a man of some means, owning six hundred acres of land in the area, while his wife is carefully referred to in all documents as 'Ann Rachel of Ilsington', a formula suggesting some social standing. Thus the Colletts were able to afford the extensions and improvements which made the house more substantial and elegant. For the first time it became the residence of an incumbant, but at this period for the living of Heveningham. The Colletts remained here until 1826 together with their children Anthony, Anne, Catherine Charlotte, and William. William died at the age of ten in 1821 and has a memorial tablet to himself in Heveningham church. Then in 1826 the house was passed to 'my now sole heir Anthony', but Antony Collett the younger moved to Bury St Edmunds in the course of the 1820s and the house was leased: first to Fenton Hort of Merrion Square, Dublin, and then to Simon Smyth who already farmed in the area and appears at the age of fifty-six in the first census in 1841, together with his wife Phoebe and two teenage children, James and Harriet. By this time further extensions to the back of the house provided accommodation for two live-in servants, William Scoging and Maria Voy, both aged fifteen.

In 1847 the younger Anthony Collett decided to sell and the house was purchased for £600 by a wealthy local philanthropist, Edmund Hollond; he had gradually acquired the advowsons or right to appoint for many local parishes, including Ubbeston. He never lived in the house, but instead, presented it to the diocese of Norwich for use as a rectory. Up to this time there had been no provision for residence in the parish and Samuel Badiley, Rector of Ubbeston for over fifty years, had lived in Yoxford, 'there being no parsonage house at Ubbeston', and ridden over to take the services. To aid him in this the Vannecks built him a stable for his horse adjoining the churchyard, and samuel did the round trip of nine miles every Sunday until his death in 1854 at the age of 84.

The first resident vicar of Ubbeston moved in during 1856: Robert James, aged thirty-five, and his wife Emma, who was a year older, together with their children Mary Anne, Charles, Edward, Emma and Ellen. Robert had been born in Cumbria and after ordination was sent by The Church Missionary Society to Prince Rupert Land, then a virtually untracked wilderness on the north west shore of Hudson Bay, to evangelize the Eskimos and the Cree Indians. During the late 1840s Emma gave birth to three children there in conditions that must have been extremely primitive; even the main history of the Anglican missions makes no mention of ministers in the area before 1850. That the experience was not wholly negative is suggested by the fact that one year after they moved to Ubbeston they had a son who they baptised Rupert. The signature of E.M.James, apparently Emma, is scratched on a pane in the south window of the drawing room.

Robert James died at the age of fifty-five in July 1876 (six years later an anonymous donor presented a fine harmonium to the church as a memorial to him) and on 31 August Edwin Watkins was installed as his successor. However the Canadian connection started, it was carried on, since Watkins had also been a missionary in the Hudson Bay area where his children had been born - Arthur in 1858 at Fort George, Alice and Ellen Georgina on 1860 and 1862 at Fort Devon. There were many repairs to the house according to the Churchwardens' notes of 1877. The James family with six children had had no room (and possibly little money) for live-in servants, but Edwin Watkins employed a housemaid and a cook - all the more necessary since his wife Anne may have been an invalid. She died eight years after their arrival at the age of fifty-seven, 'after much suffering', as her tombstone records. The family were either very frugal or had private means since the church accounts for the next thirty years show a succession of gifts from them to both to church and parish: a plaque with oak fretwork framing the Ten Commandments painted on zinc erected over the altar; a pipe organ to replace Robert James' harmonium; the provision of a beef and plum pudding dinner for every family to celebrate Queen Victoria's golden jubilee, and then ten years later Edwin gave a 'bridge over the Wash' as a diamond jubillee gift to the parish. His son Arthur, listed in the census returns as an engineer, was also generous, presenting a service book on the occasion of his marriage and in 1897 giving £10 to buy a new stove and matting for the aisle.

After his wife died and Arthur moved away, Edwin lived on in the house with his two daughters. Ellen Georgina is mentioned in 1898 as collecting personally within the parish more than half of the £6.2s needed to place a harmonic flute stop in the organ. When she died in the following year her gravestone referred to her as 'the gentle daughter of Edwin Watkins'. Her father outlived her by eight years: on 23 October 1907 Edwin, then aged seventy eight, set off on his bicycle to visit parishioners and was found dead at the top of Clay Hill, within sight of the church which he had served for thirty-one years. Alice continued to live in the parish until her death in 1935, and she is buried in Ubbeston churchyard beside her parents and her sister. It was as well that she did not live to see the selling-off of the rectory in 1939, the start of the process which led to the secularization of the church itself in 1974.

Compiled from Ipswich Records and the house's title-deeds by Veronica Baker Smith, fomer resident and former SLHC Recorder for Ubbeston & Heveningham. Our thanks to Veronica for allowing us to publish her research.