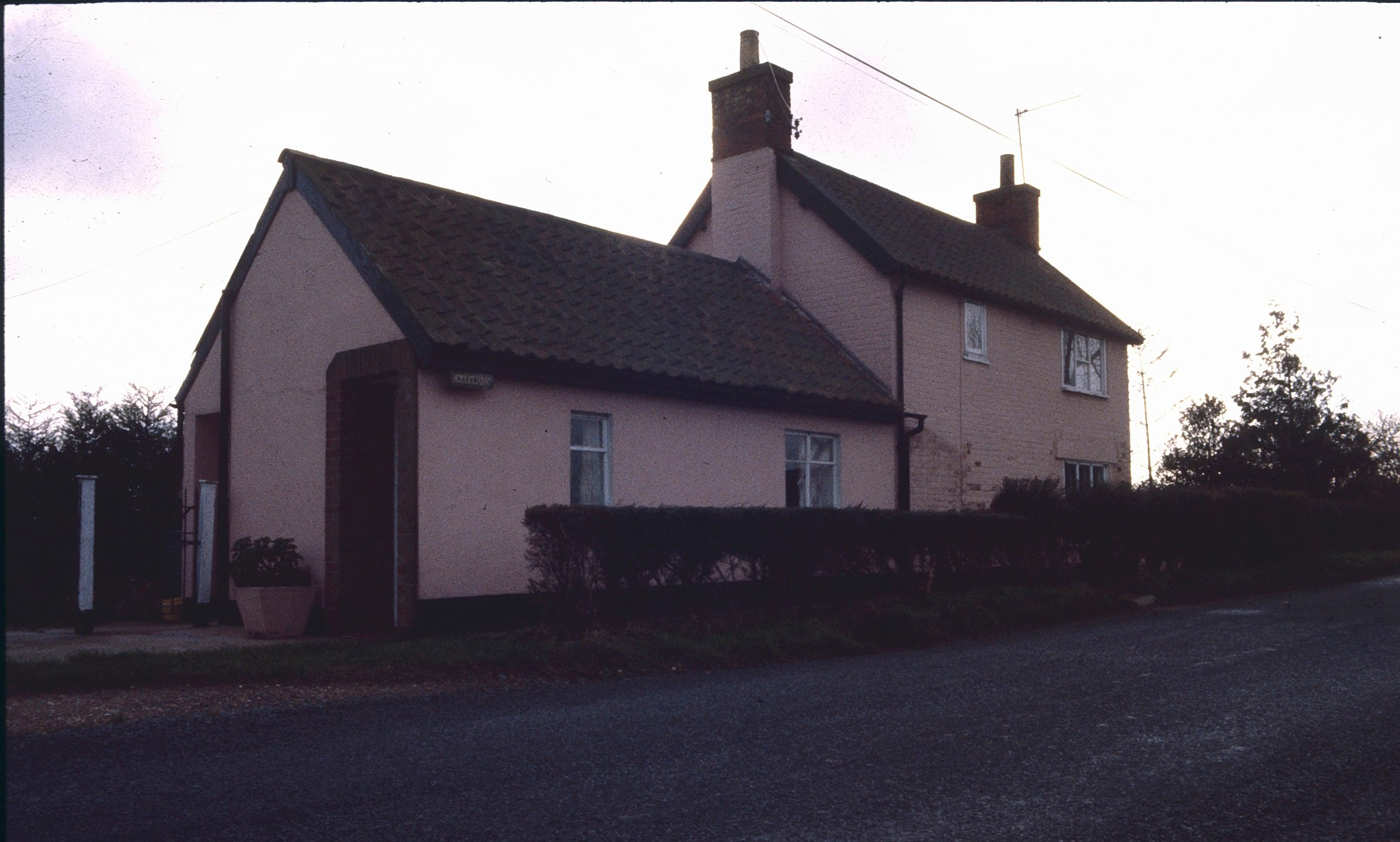 The building which became Rose Cottage and then Charnwood shown here in 1989 when newly purchased. Photograph courtesty of Andrew Gourlay. The second cottage, known as Thorn Cottage had been destroyed by fire after the Second World War. 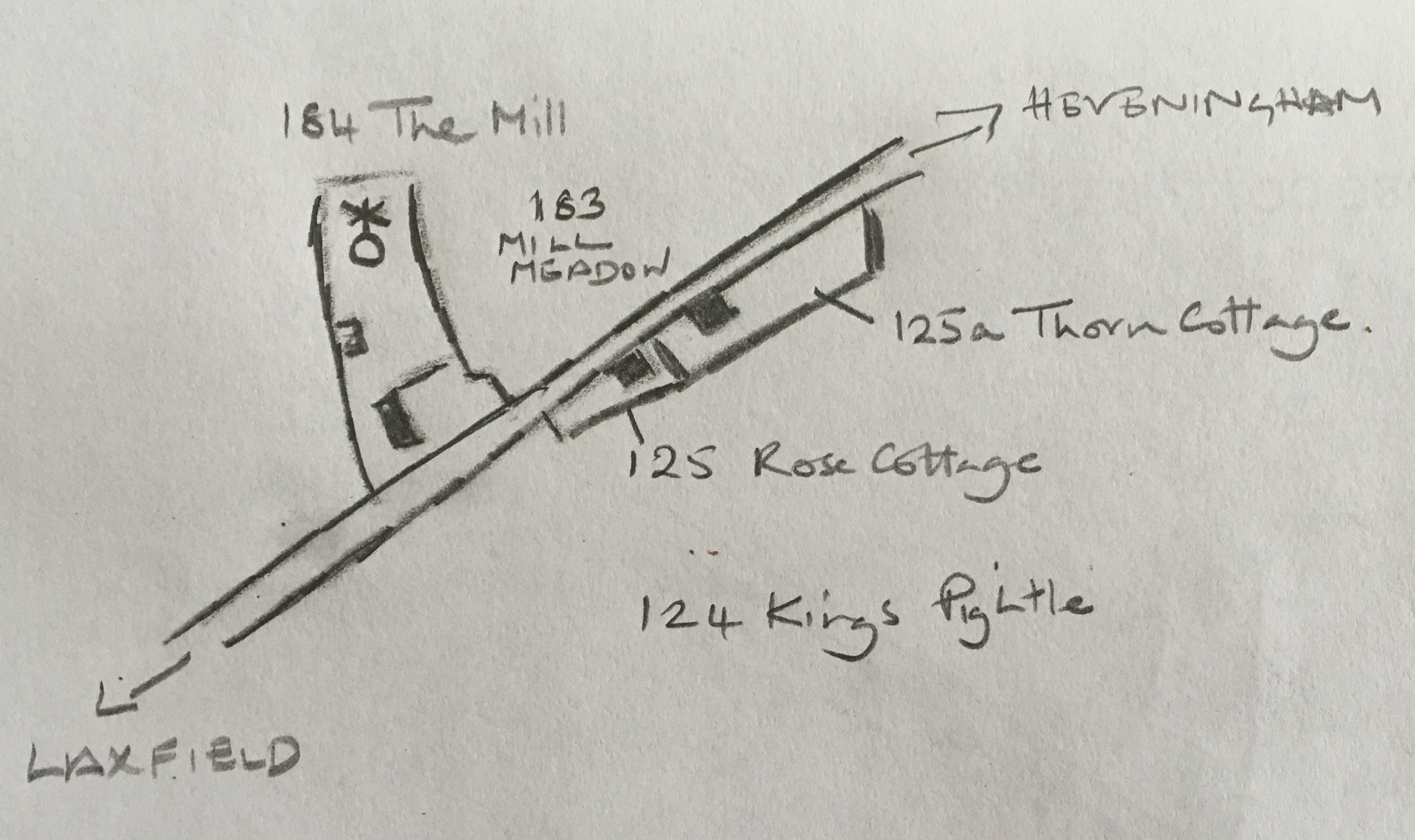 The two cottages appear on the 1839 Tithe Map as shown. The owner of both cottages is listed as George Cracknell, who rents out Rose Cottage (125) as it was later called, to Robert Taylor and lives in the bigger cottage, later to be named Thorn Cottage (125a), himself. He also rents the small field behind the cottages called Kings Pightle (124) from Robert Huson. Did he buy the land for the two cottages from him? According to the 1841 census, Cracknell is a bricklayer and it is quite probable that he is the builder of both cottages. He may also have rebuilt the Mill House opposite in the 1840s and it is conceivable that he also built the three double cottages next door to his house on the Heveningham side. Those cottages are now three dwellings known as The Haven, The Vine and Tyndale, built in the 1830s and early 1840s.

In 1841 the 60 year old George Cracknell is living in Thorn Cottage with his 50 year old wife, Mary, and his two sons, George and Richard, who were agricultural labourers. By 1851 Richard has become a Journeyman Bricklayer, is still living in Thorn Cottage and is now the head of the household. The census lists him as being born in Ubbeston in 1816 and marred to 25 year old Emma from Cratfield. They have two daughters and a son, (Betsey, Emma Lydia and Richard) all born in Ubbeston. George, Richard’s father, the bricklayer is living with the family and is now shown as being born in Framlingham in 1778 and is now a widower.

Next door in what became Rose Cottage, it appears that a branch of the Skeet family is living. The Skeets had a long connection with Ubbeston and many have headstones going back to at least 1763. George Skeet and his family appear on both the 1841 and the 1851 census. George is an agricultural labourer, born in Ubbeston in 1815 and married to Mary, born in Cratfield in 1816. In 1841 the Skeets have three daughters: Mary, Emma and Mary Ann. By 1851, two more daughters appear named Eleanor and Eliza and, maybe a much longed for son, born that year and called George after his father. It is not clear if the Skeets were still in Rose Cottage or they may have been replaced by William Upson jnr born in Laxfield in 1826, an agricultural labourer, married to Sarah Anne from Thornham. Their son, also William, was born in Ubbeston in 1849.

Rose Cottage – 1841 Census: (Possibly the following – as occupier on Tithe Apportionment – Robert Taylor not on 1841 census. The Skeets appear next to the Cracknells on the census – not necessarily proof)

[Skeet family graves go back to at least 1768 in Ubbeston. ]

[Other possibilities: Richard Cooper, Robert Borrett, John Robinson as the only other households not matched to a dwelling] 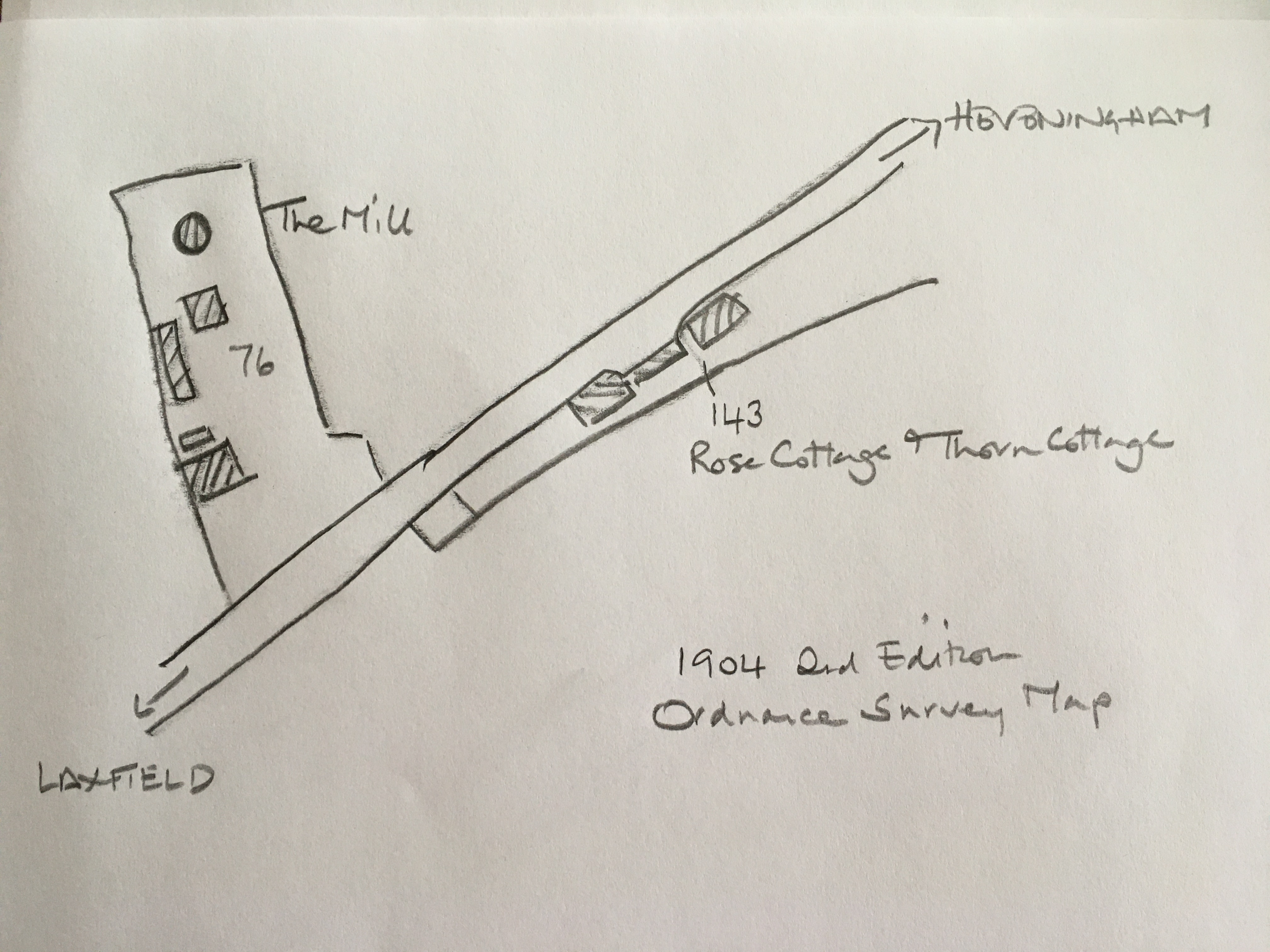 SIMON PAGE OF DARSHAM, YEOMAN, OWNER OF ROSE & THORN COTTAGES FOR SOME TIME AT THE END OF THE 19TH C.

Page died 30 Oct 1901 leaving his estate to his wife Bertha. She was Bertha Edwards and a singlewoman, when they married in Darsham 21 Jun 1881. He was a widower and they were both resident in Darsham. In 1875 Simon lived in Holton Road, Holton and was listed in Kelly’s as a Private Resident. By 1879 Simon was living in Victoria Cottage, Darsham. He was still listed as a Private Resident there in 1896 and probably died there in 1901. The will was written in 1897 and probate granted in London 15 Feb 1902. He left £4172 to his wife and Charles Henry White, clothier.

In 1902 the cottages were sold by Bertha and White, her co-Trustee, to Henry Charles Burch of Deptford, Stone Mason.

Two several cottages or tenements with the outhouses, outbuildings, yards, gardens and land thereto belonging… the said land doth contain thirty six perches… situate lying and being in Ubbeston… on the south side of the road leading from Ubbeston Mill to Laxfield and butt upon land formerly of William Talent but now of the purchaser [H C Burch]… and upon lands of John Goodwin but now of Charles Mutimer towards the east [Mutimer owned Tyndale, The Haven and The Vine] … formerly in the several occupations of Richard Cracknell & Henry Aldis and are now in the several occupations of William Read & Herbert W Read being now known as Thorn Cottage.

1928 Mortgage James Robert Porter of The Stores, Ubbeston Green At some point Ralph Porter’s family moves into Rose Cottage and runs the shop. [Ralph Porter’s account from his autobiographical piece A Snapshot of my Life:

Dad’s brother Jim bought a shop and cottage in Ubbeston Green, Suffolk, and he persuaded my father to take the cottage. So we moved there 1926/27 when I was very small…

The Cottage in Ubbeston Green was called Rose Cottage and it was two up two down. So just the four rooms with uneven brick floors downstairs. One bedroom was a landing bedroom that you walked through to get to the other bedroom... 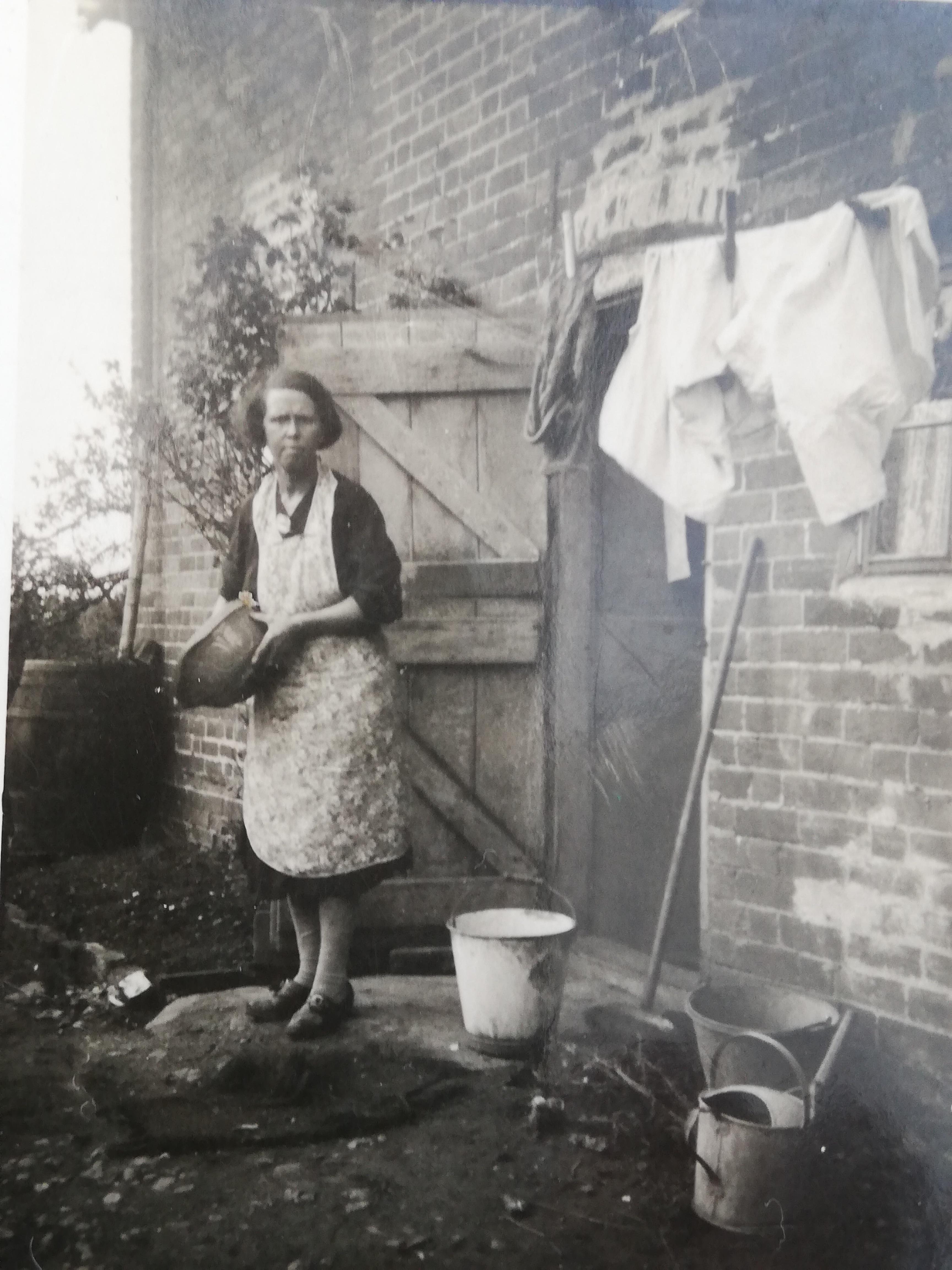 1936 James Robert Porter of the Cock Inn, Glemsford sells both cottages, still known as Rose & Thorn, to George Henry William Cox of the Stores Ubbeston Green, Grocer. [This seems to imply that the Porters living in Rose Cottage weren’t running the shop at this point?]

1938 Maurice Alfred Porter, Ralph’s brother, was killed in a road accident. The report from the Nottingham Journal Monday 18 April reads as follows:

Maurice Alfred Porter (16) of Ubbeston, Suffolk, was cycling home from Walpole Parish Church where he had been confirmed by the Bishop of Edmundsbury and Ipswich when he was involved in collision with a motor-car and received fatal injuries.

1954 Reginald Francis Johnson sells land where Thorn Cottage had stood to Rural District Council of Blyth. [Fire had destroyed the building at some point before.]

In 2008 one time resident of Ubbeston who, lived at the Croft, Frank Sherman, spoke about Kingsway, which is built on the site of Thorn Cottage/The Stores:

This bungalow was not here. It was just part of land that joined up with the shop. The shop was burnt down to the ground. That was joined on more or less to the Porters’ house, Rose Cottage, now derelict. In the end they had makeshift living here, a caravan or something, and ran the shop for a time.

Rose Cottage – there were never windows in there – they were black tiles- black blanks at the top.

Ralph Porter lived in Rose Cottage and his brother Kenneth was born there. He spoke about Rose Cottage in 2006:

I would like to talk about the early days in the late 20s, early 30s, when from the age of 5, my brother, Ken, myself, my brother Maurice, who was killed in an accident [on Ice House Hill, Heveningham 1937] and older sister Alice… used to walk to Laxfield School…

I don’t know if you know what we call Rose Cottage, that’s the derelict one opposite the Mill House – two up, two down, no water, no gas, no electric, no sewer – bucket and chuck it! When you washed yourself, you had a tray on a chair with a bowl – no sink, so you threw the water out on the garden. Mother used to cook on an open fire with a trivet – used to cook a full meal on there – and then in summer we used to have an oil oven…

in our house we had pond water in summer because there was no soft water. In the winter we had tank water – we had to boil the wigglies out of it!

Ralph remembered the pond in front of the Haven:

...a little pond. Because that got pumped out when the fire.. [burnt down the village shop].

Arthur Day, a long term resident of Ubbeston, [he moved to Ubbeston when he was 6 months old and eventually lived in the White Cottage next to the church] remembered the shop as the sweet shop that burnt down during the 1920s in an interview in 2002. [We know it wasn’t the 1920s but post 1939] 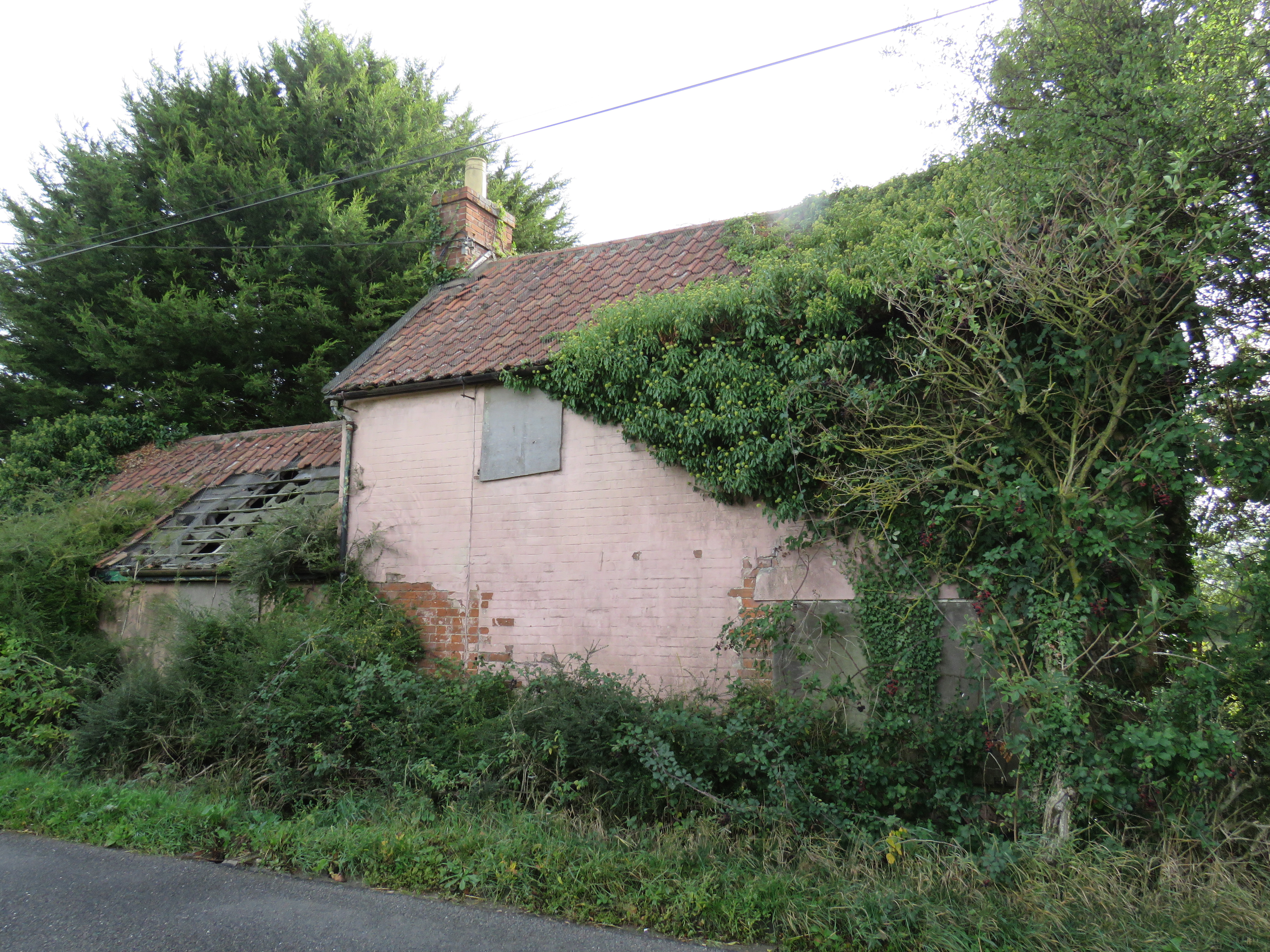 Charnwood is sold again in 1989 but by the end of the century is virtually derelict. Sold again by auction in 2019. The present owners are currently sympathetically restoring the building and considering reviving the name Thorn Cottage.