Construction of the Heveningham-Ubbeston Road Bridge in 1794. Compiled from Ipswich Records for the celebration or the 200th birthday of the bridge in July 1994 by Veronica Baker-Smith

On June 23, 1794, Robert Baldry and Richard Randall drew up an agreement for the building of ‘a new and substantial Bridge of brickwork over the River or Rivulet [the River Blyth] dividing the parishes of Ubbeston and Heveningham at and for the sum of seventy-six pounds.' The two men were the Surveyors of Ubbeston, responsible for the supervision of all buildings within the village, and Robert Baldry was especially well placed to oversee this particular work since he had built the present Old Rectory for his own use eighteen years before (his initials can still be seen on the chimney stack).

The former wooden bridge, after some years of decay, had finally been swept away by floods in the winter of 1793-94, thus cutting ‘the King's Highway' between Heveningham and Cratfield along what is now known as the Low Road. The present road forking right to Huntingfield did not then exist, but it was to Huntingfield that they turned for advice - it had recently built its own bridge and the design was now copied. Contributions were invited from prominent members of the community: Sir Joshua Vanneck [by now Lord of the Manor of Ubbeston] as befitted the builder of Heveningham Hall, offered £10, the two Rectors [Samuel Burroughs and Simon Adams] gave £5 from the glebe lands and five Ubbeston men and ten from Heveningham underwrote the rest. At the risk of promoting inter-village ill-feeling, it may be noted that two of the Heveningham men were illiterate and signed with a cross!

Careful estimates were drawn up of the cost of materials and £28.15s.7d. was allocated. Eighteenth century bridges were no different from the Channel Tunnel today, and the actual cost on completion four months later had risen by a third to £38.15s.2d., despite a last minute effort to save money by using the oak supports from the old bridge which had been salvaged. Fourteen thousand red bricks were transported from Halesworth at a charge of 6s.; the forty-eight coping stones were a special order and cost 1s. each, as much as three dozen bricks.

Labour costs were easier to control - landowners and farmers from the two villages volunteered their men for so many days' work and were paid accordingly, a careful division being made between the cost of men employed during harvest-time and after the harvest was in. The skilled bricklayers were paid £1.7s.6d. and 2s.5d. worth of beer for every thousand bricks they laid, while Richard Randall charged a steep 3s.6d. for ‘time spent at meetings'.

The bridge was completed on schedule on October 20, and the accounts had been authorized, when George Simpson, the owner of Ubbeston Hall, [he was tenant] had a brainwave - maybe the contemporary equivalent of the Rivers Authority was liable for the cost so that everyone could have their money back. He wrote a hopeful letter to this effect, and was doubtless disappointed to receive the reply, ‘My kindest regards to Mrs Simpson, but the whole burden of the Bridge must lay upon yourselves.'

Scene in July 1994 at party celebrating 200th birthday of the bridge. Thanks to Veronica for allowing us to reproduce her research and photograph here 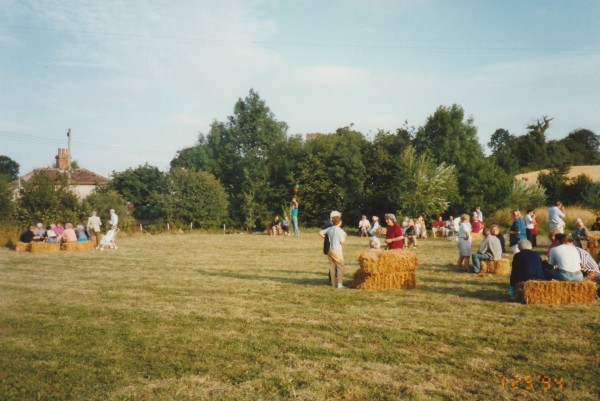